So many quangos, so little Irish

Peter McGuire takes a look at the Irish language strategy over the past 20 years and asks what's been done? Millions of euro flow into a range of Irish-language educational quangos. But with few people having little more than cúpla focal, it’s time to question the strategy 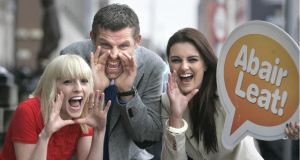 In July 2007, the Harris Report indicated that less than one third of pupils from English-medium schools achieved mastery of the Irish language between 1985 and 2002. The report also found the confidence of teachers to speak Irish declined significantly, with almost a quarter indicating their own standard of Irish was “weak”.

In our schools, there are serious questions about how effective Irish-language policies have been, with many school leavers still unable to speak more than a cúpla focal within a few years of the Leaving Cert. Last week, it emerged some gardaí are unable to ask basic questions in Irish, despite having studied it in school and at the Garda College in Templemore.

Is the taxpayer getting value for money? Have the myriad Irish language quangos achieved anything? And what is the future of the language, a slow death or a miraculous revival?

In 2010, the Fianna Fáil -led government published the 20-Year Strategy for the Irish Language. The document was rich in promises and expensive aspiration. Three years later, Foras na Gaeilge, the all-island body for the promotion and development of the Irish language, which also channels public funding to 19 Irish-language organisations, considers publication of the strategy a major result in itself.

Progress on the strategy has been slow. Several key parts have been axed. A planned Irish-language education resource centre in Baile Bhúirne, Co Cork, will not now happen.

An Comhairle um Oideachas Gaeltachta agus Gaelscolaíochta (COGG), which provides Irish-language resources to schools, has been downgraded: the opposite of what was promised in the strategy.

However, many other educational parts of the strategy are being implemented, in part at least, including the development of third-level programmes at NUI Galway and Dublin City University.

COGG, Gael Linn, and Foras na Gaeilge all produce educational materials for Irish medium schools on the island of Ireland, although COGG produces the vast majority.

In Northern Ireland, An tAoisanaid, which receives the majority of its funding from the State through Foras na Gaeilge, provides these resources for its Irish-language school curricula. A further unit within Foras, Clar na Leabhar Gaeilge, publishes occasional Irish-language books for a general readership.


Duplication of resources
The Irish language sector also has significant and powerful representation, with Conradh na Gaeilge, Comhluadar, Comhar na Múinteoirí Gaeilge, and Gaelscoileanna Teo, all of which are publicly funded, among the organisations with have a lobbying and advocacy role.

In the face of opposition from many of the public bodies funded through Foras, amalgamations of these quangos have been slow.

While much public money has been invested in Irish-language educational initiatives at all levels, in contrast, modern European languages were completely axed from the primary-school curriculum in 2011.

Major technology companies such as eBay, Facebook, and Google are hiring staff from France, Spain, Germany, and Italy due to the lack of qualified European-language graduates from within Ireland.

There is no corresponding level of public investment in European languages that comes remotely close to that spent on Irish. There have always been serious questions about the effectiveness of Irish-language policies in education. The 1966 Fianna Fáil government, led by Seán Lemass, made a series of pledges to support the language and increase bilingualism. A three-year action plan for the Irish language was published in 1983 during a Fine Gael/Labour government.

Then, as with the latest strategy, teaching of other aspects of the curriculum through Irish was called for, and recognised it as crucial for young people to truly engage with the language. It never happened.

A major focus of the current strategy is on increasing the number of Irish speakers nationwide, and supporting the many organisations that provide Irish-language classes, competitions, courses and events. But meaningful or effective change in how Irish is taught in schools has been slow since the foundation of the State. Will the latest attempts to reform the Irish language sector also amount to nothing?

To prove the point that immersion works, the level of pupils in Gaelscoileanna who achieve mastery in both listening and spoken Irish is above 90 per cent.

The strategy is in the first phase of implementation and there are still 17 years to bring about change. But three years on, no significant developments have taken place to introduce widespread immersion or partial immersion education.

Indications from the Department of Education and from senior figures in Irish-language organisations suggest that, despite its centrality to the strategy, the issue is not on the table for the time being.

The focus is firmly on revising the curriculum for all primary pupils and supporting immersion education in Irish-medium schools, although the National Council for Curriculum and Assessment is developing a new Irish-language primary curriculum and looking closely at the changes that have already been made to the Leaving Cert, particularly the oral exam.

View from the Irish language sector
The Irish-language lobby is suspicious of the Government, after Taoiseach Enda Kenny ’s pre-election suggestion that compulsory Irish in schools be abolished. More recently, Minister for Education Ruairí Quinn stated that too much time in schools is spent on Irish and religion.

“There is no evidence of any commitment to the 20-year strategy in the current Government,” says one senior figure in a major Irish-language organisation. “Little by little the language is being downgraded.” The current Programme for Government commits the Government to supporting the strategy and delivering on achievable goals.

The most significant piece of legislation relating to the Irish language is the controversial 2011 Gaeltacht Act, which redefined Gaeltacht areas based on the amount of locals speaking the language rather than on geographic location.

“The Irish-language community are being frozen out of the decision-making processes,” says Julian de Spáinn, general secretary of Conradh na Gaeilge. “The publication of the Strategy was a big achievement and included a range of recommendations from the community. Three years later, and the Department is picking and choosing the easiest elements of the Strategy, implementing only parts that are cost neutral, and ignoring whole swathes of it altogether. A huge amount of mistakes are being made. A high-level structure between the community and the authorities must be set up to oversee the implementation of the strategy, or it will not succeed.”

There are some positive indications. An 11 per cent increase in the uptake of higher level Irish at Leaving Cert level has been linked to the new marking scheme that awards 40 per cent to the oral exam.

Overall, the number taking higher-level Irish increased last year by almost 5 per cent to 37 per cent.

De Spáinn says that the teaching of languages needs to be changed entirely. He argues, supported by international evidence, that partial immersion education is central. However, the Department of Education is a long way from implementing this change.

Apart from some minor curriculum adjustments, the strategy barely addresses how the teaching of Irish will change. It seems like another major oversight in our approach to the national language.

Irish-language education organisations: Who are they, are they , what do they do, and how much public money are they spending?


Foras na Gaeilge: €19.76m per annum
Foras had a budget of €19.76m in 2012, receiving 75 per cent of its funding from the State and 25 per cent from Northern Irish taxpayers. It funds 19 organisations, including
Comhluadar, which provides support to parents or guardians who speak Irish to their children, was allocated €214,310 last year.
Cumann na bhFiann, which organises Irish language youth clubs. 2012 allocation: €450,954.
Gael Linn promotes Irish language and heritage. It was granted €588,139 through Foras na Gaeilge in 2012.
Conradh na Gaeilge promotes the language; it was granted €509,000 in 2012.
Comhar na Múinteoirí Gaeilge supports Irish teachers; it was granted €186,221 in 2012.
An tAoisanaid provides books and resources to Irish-medium schools in Northern Ireland; it was granted €351,766 in 2012.
abair.ie €439,194 was spent developing this Irish-language speech synthesiser.
Freagra, €15,000 per year is spent on a helpline for queries on the Irish language. TEG €420,813 to support NUI Maynooth ’s exam system for adult learners of Irish.

Údarás na Gaeltachta: €40m per annum
The regional authority responsible for the social, economic and cultural development of the Gaeltacht managed a budget of €40m in 2012. Its education and training section paid out over €24m between 2007 and 2011. Most of this money goes towards employment training initiatives that provide Gaeltacht applicants with qualifications, skills and work experience; and also towards funding community development programmes.

COGG: €1.55m per annum
COGG was established in 1998 to cater for the educational needs of Gaeltacht schools and Gaelscoileanna. The Government’s decision to subsume COGG within the National Council for Curriculum and Assessment has generated considerable ill feeling in the Irish- language sector. The annual figure includes €250,000 for a Foras na Gaeilge/Department of Education project.

Most of the seven universities have not carried out a detailed costing of the resources to support the Irish language, although the oversight at NUI Galway and University of Limerick is very strong.