Shut out of school, students spend strike day at sea 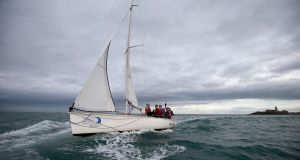 Thursday’s strike by teachers left many teenagers at a loose end but one group of students used the occasion to move their learning to the sea.

The Irish National Sailing and Power Boat School in Dun Laoghaire, Co Dublin held a special day of sailing for students affected by the strike, the first in a series of walkouts organised by the Association of Secondary Teachers Ireland (ASTI) over low pay for recently recruited staff.

The St Benildus College student said he enjoyed the freedom of being on the water rather than in front of the blackboard, and was excited for a day off to do something he usually only got to do on Saturdays.

Of the strike day, Jack said: “If I’m being honest, I kinda like it. But you do need to go to school in fairness. And in the long run, from my teachers’ perspective, I can see their point and why they’re doing it.”

He was one of 15 local students who spent the day at the club, most of whom are regular sailors.

Their parents were appreciative of the chance to get their kids doing something productive with their time off, said one of the club’s senior instructors Orlagh Connor.

“A lot of the parents came down said, ‘well they’d be at home watching TV or doing nothing anyway, so they might as well come down and get out in the fresh air’,” she said. “So they were really, really happy about it.”

The sailing school has run “strike day” sailing days in previous years, and decided to it again to keep kids’ bodies and minds active during the action.

While other students were similarly happy to have the day off, many of those in fifth and sixth year who had final projects due in December and mock-exams approaching wen’t quite as enamoured by the break, said Jane Hayes Nally (17).

“There are students who need that support from teachers,” said Ms Hayes Nally, president of the Irish Second-Level Students’ Union.

“Particularly those students who aren’t so academically driven - they’re gonna benefit more from the time in class.”

The girls from her school in Cork have Christmas exams right after the mid-term break, Ms Hayes Nally said. While they don’t know if their school will open after the break, they’re going to spend Thursday studying for them anyway.

The fifth-year student said she hoped the ASTI and the Government can work together as quickly as possible to resolve the pay dispute, but in the meantime they should be putting forward proposals to minimise the impact of the strikes on students.

“Whether that’s extra classes or some kind of alternative, we need some way that the students will not have to feel the full brunt of it,” Ms Hayes Nally said.

“At the end of the day, it’s the students who we should be prioritising; because it’s affecting them the most and they have no control over it.”