Selling Jackie letters would not save All Hallows, says college 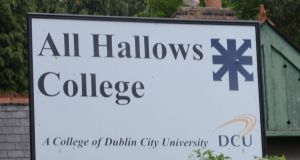 College president Fr Patrick McDevitt said it needed “at least €2 million to get into next year” and the letters would have provided only “one piece” of a plan to save the institution from closure. Photograph: Cyril Byrne/The Irish Times

Selling the Jackie Kennedy letters would have bought All Hallows College “a little wiggle room” but wouldn’t have prevented closure, the private college said last night as it began to wind down its operations after 172 years.

College president Fr Patrick McDevitt said it needed “at least €2 million to get into next year” and the letters would have provided only “one piece” of a plan to save the institution from closure.

Last week the Dublin college put up for auction the collection of letters written by former US president John F Kennedy’s wife to an elderly Irish priest, and they were valued at over €1 million.

However, just days later, at the direction of All Hallows and the Vincentian Fathers who owned the letters, they were withdrawn from sale.

Discussions are now taking place with the Kennedy family on how best to preserve them. Increasing deficit The college said it had been operating at an increasing deficit over many years, and although it had embarked on a major fundraising programme “the challenging landscape of today’s third level education arena has led to a diminishing of the college’s reserves to an unsustainable level”.

There are 450 students enrolled on degree programmes, with another 500 taking part in continuing education courses, and it was the college’s failure to increase these figures which lay at the root of its problems.

The college claimed it had been “constrained” in its attempt to grow enrolment figures by a cap on the numbers of undergraduates eligible for the free fees scheme.

However, this was challenged by Department of Education figures which showed the college failed to reach this cap in the last five years.

In the academic year 2013-2014, fees were reimbursed to 119 students when the cap was 130. Fr McDevitt paid tribute to the staff at the college, “who had worked very hard” in addressing financial difficulties there.

Close to 100 people work at the college in full-time and part-time positions and consultations will take place in the coming weeks about redundancy. Accredited degrees Dublin City University, which accredited degrees at All Hallows, expressed sadness at the closure but stressed it had “no governance or management function”.

Department officials indicated that as the college was private, there was no liability on the State to find alternative employment for staff.

Fr McDevitt said staff at the college had been aware of the Kennedy letters for years and he was shown them by his predecessor when he took over as president in 2011.

Their existence was known to the Kennedy family and, when Jean Kennedy Smith was ambassador to Ireland from 1993 to 1998, she was offered them.

Last weekend, following an extensive trawl at the college, it was discovered that the priest to whom the letters had been sent, Fr Joseph Leonard, had left a will in which he bequeathed them to the Vincentian congregation.