Schools will be obliged to consult with parents on key decisions

Issues such as uniforms, voluntary contributions likely to be subject of parents charter 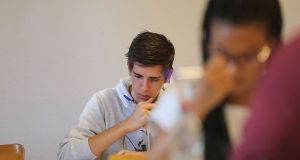 An investigatory process will then take place to establish if the complaint should be the subject of a formal disciplinary inquiry. Photograph: Getty Images

All schools will be required to draw up parents’ charters which will require them to consult on issues ranging from school uniform costs to so-called voluntary contributions.

Minister for Education Richard Bruton said the new charters will also require schools to set out in detail how they plan to handle complaints made against teachers or school bodies.

He made the comments following the introduction of long-promised “fitness-to-teach” measures which came into force on Monday.

Under these rules, teachers could be sanctioned or even banned from the classroom for cases of serious professional misconduct or poor performance.

The first hearings, likely to be held with the next nine to 12 months, will be held in public by default.

They will be overseen by the teaching profession’s regulatory body, the Teaching Council, on which there in an in-built majority of teachers,

The fitness to practice system – first provided for in law more than a decade ago – drew a broad welcome from a range of groups.

Ombudsman for Children Dr Niall Muldoon said the delays have been frustrating for students and parents.

“A comprehensive and consistent complaints handling structure to deal with these types of complaints is badly needed and must be welcomed,” he said.

He said it was expected that only very serious cases of improper professional conduct will be considered for investigation.

“The Ombudsman for Children’s Office will monitor closely the threshold set by the Teaching Council for a very serious complaint. It is important that parents, and advocates on behalf of children, are clear about how they can have their concerns addressed,” he said.

Dr Muldoon also welcomed plans for a charter for parents and students, though he said the details were not yet known.

“We will be monitoring developments to ensure that the charter supports improvements in local complaints procedures in schools,” he said.

“We want to see effective complaint handling practices affecting children and young people so that any issues can be dealt with as quickly as possible in the best interests of the child.”

Teachers’ union have broadly welcomed the fitness to teach measures, though some have expressed concern that the sanctions are highly punitive and that individuals may be the subject of vexatious complaints.

The Teaching Council, however, said the new fitness to teach measures were about “improving teaching not punishing teachers”.

Tomes Ó Ruairc said the process “will be about reassuring the public and the profession as to the quality of teaching and learning that all learners can expect in our schools”.

One of the main managerial bodies for secondary schools, the Education and Training Board Ireland (ETBI), said the move will help promote high standards.

Michael Moriarty, the ETBI’s general secretary, said the measure provided an opportunity for “openness and transparency” in dealing with issues that can arise from time to time within the profession.

Under the new process, a complaint relating to professional matters can be made against a registered teacher to the council from today.

An investigatory process will then take place to establish if the complaint should be the subject of a formal disciplinary inquiry.

The process includes a number of potential sanctions ranging from advising, admonishing or censuring the teacher, to requiring the teacher to comply with conditions as part of their registration or attending a professional learning programme.

In the most serious cases, the sanction of suspension or removal from the Teaching Council’s register will be available.

The council said these provisions were in line with those of other regulators such as the Medical Council and the Nursing and Midwifery Board.