School league tables: Which schools have improved the most?

Schools in disadvantaged areas are seeing a rise in the number of students progressing to college but inequalities still remain. For more analysis see the full tables in today's newspaper 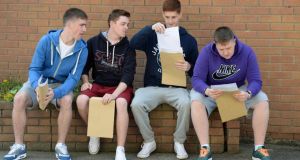 The Irish Times Feeder Schools is published with the paper today. A 12-page print supplement with full tables of county-by-county, school-by-school information on how many students Irish schools sent to college this year. Full analysis of this year’s figures, how geography and social class affect college progression, which schools send more students to high-point courses, and which schools have improved the most are inside - Deirdre Falvey, Education Desk Editor (Click here to view the tables associated with this article)

Stronger links between postprimary schools and third-level institutions, more sharply focused guidance counselling, and higher student expectations through performance targets are among the reasons schools have cited for the improvement in progression rates.

Familiar names top the list of schools acting as feeders to high-points courses. The Teresian School, Dublin 4; Sandford Park School, in Ranelagh, Dublin 6; and Glenstal Abbey, in Co Limerick, filled the first three places. But the most-improved list, recording progression to all higher-education institutions, featured a much more diverse range of schools, including several falling under the Delivering Equality of Opportunity in Schools – or Deis – programme.

Limerick, Roscommon and Galway had the highest third-level progression rates, at 84-85 per cent. Students living in Dublin or Longford were the least likely to go to college, with progression rates of 66 per cent and 64 per cent.


Both positives and negatives can be taken from the data. Although they show that inequalities are still endemic in Irish education, some schools in disadvantaged areas are making progress.

A significant proportion of students will also have progressed to Ballyfermot College of Further Education, but these aren’t recorded in the figures as it is not designated third-level.

Mount Seskin’s principal, Helen Taylor, said her school’s success in helping more students into college started with setting higher targets in the Junior Certificate. By getting more students to take higher-level courses in the junior cycle, especially maths, it “raised the bar for the senior cycle”.

She said the “higher expectations” were having an effect. “When our school was built we were at the edge of civilisation,” she says. But it now it has a changed catchment area, with a good community spirit and highly motivated staff.

Tom Prendergast, principal of CBS Sexton Street, says there were “multifaceted” reasons for its progress. These included the employment of an extra guidance counsellor in 2012 and the support of scholarship programmes, notably a scheme sponsored by its past pupil JP McManus.

When progression rates from five years ago, in 2009, are compared with those in 2014, St Killian’s Community College in New Inn, Co Galway, was shown to have made the biggest jump, rising from 56 per cent to 173 per cent. However, the school’s figures for 2014 were skewed somewhat by a large number of deferrals and a relatively small number of Leaving Cert sits (11) this year compared to previous years.

Once that school is eliminated, along with other schools with fewer than 20 pupils, Coláiste Oiriall in Monaghan sits top of the most-improved list, up from 10 per cent to 97 per cent. This carries the qualifier that the school only opened in 2004, and early admissions may not have been fully recorded by colleges.

The same factor applies to Coláiste Chraobh Abhann, in Kilcoole, Co Wicklow, which opened in 2003. Nonetheless, its principal, Shane Eivers, confirms an upward trend, by his own calculations from 55 per cent progression to third-level a few years ago to 75-80 per cent now.

Plus, school league tables are only part of the story: we have a guide to how to choose the best school for your child, and profiles of how individual schools have worked to improve the numbers of students they send to third-level. Feeder Schools 2014 is published with The Irish Times newspaper on Thursday 27th