Russia tops league for number of visas to study in Ireland

Saudi Arabia in second place, followed by China and India 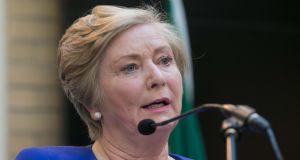 Tánaiste and Minister for Justice and Equality Frances Fitzgerald: said students from a large number of countries such as the US and Brazil as well as members of the European Economic Area do not require visas to study in Ireland.Photograph: Gareth Chaney Collins

Russia tops the league table for the number of study visas to Ireland issued over the last three years, followed by Saudi Arabia, China and India. India had the highest number of visas refused for an individual country.

Figures released by the Department of Justice showed that between 2013 and last year 7,268 visas were issued to students from the Russian Federation, while 100 applications were refused.

A total of nine visa applications were refused from Saudi Arabian students.

A total of 4,496 visas were issued to students from the People’s Republic of China, just under 500 fewer than to Saudi Arabian students. The State refused 274 Chinese student visa applicants in the same period.

During the three years to 2015, student visas were issued to 3,588 Indian citizens and 1,502 applications were rejected.

A total of 7,841 visas were issued to “all other nationalities” and 3,094 applications were refused.

Minister for Justice Frances Fitzgerald released the figures in a written parliamentary reply to People Before Profit TD Gino Kenny.

She told the Dublin South West TD that students from a large number of countries such as the US and Brazil as well as members of the European Economic Area (EU member states, Iceland, Norway and Liechtenstein) did not require visas to study in Ireland.

Ms Fitzgerald said her department operated a visa system that examined the bona fides of each application.