Quinn says ‘fear of change’ is reason for opposition to reforms 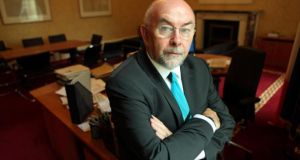 Minister for Education Ruairí Quinn it was “difficult to continue talking” over the din but the “small but loud minority” was entitled to protest at yesterday’s ASTI conference. Photograph: Frank Miller /The Irish Times

Minister for Education Ruairí Quinn has played down the controversy over the reception he received at the ASTI conference yesterday, saying it was “difficult to continue talking” over the din but the “small but loud minority” was entitled to protest.

Speaking this morning on RTÉ Radio, he said he believed a “fear of change” was one of the reasons for opposition to his Junior Cycle reforms, while there was also a “residue” of resentment over cuts in pay in recent years.

ASTI general secretary Pat King later condemned on RTÉ what he described as the “extremist” and undemocratic actions of protesters who interrupted Mr Quinn’s address.

Mr King said he believed the heckling was pre-planned for party political reasons by “the usual small number of suspects”.

“There’s certainly a group of people who do not have the best of interests of education or teachers at heart and saw this as an opportunity to win some sort of political score against a minister of a particular party,” he said.

Mr King said he apologised to Mr Quinn immediately after the event for the interruptions and the Minister accepted his apology. Most teachers were “appalled by that kind of behaviour”, Mr King said.

Mr Quinn told RTÉ that various former ministers, including Noel Dempsey and Mary Coughlan, had experienced similar grief from the ASTI even when “there was plenty of money around unlike today”.

He pointed out that the ASTI president Sally Maguire had praised many aspects of the Junior Cycle plan and these views were shared by teachers. He urged them to reengage with the consultation process.

Responding to Ms Maguire’s call to defer the Junior Cert changes, the Minister said he had already slowed down the programme.

“It’s going to take over 10 years to be implemented so we have plenty of time to resolve the issues and look at how the changes are actually working on the ground.”

Mr Quinn admitted he “intermingled” his words at yesterday’s conference when he went off script. He explained that he wanted to highlight the importance of improving the level of mathematics teaching in Ireland.

“All the research shows that an increase in science, engineering, mathematics and technology is essential for the globalised ICT world in which we now live,” he said.

“They’re well capable of doing the course, but consciously drop down to ordinary level because it requires less work...they turn around and very rationally say I’m not going to need to higher level maths if I’m going to become a teacher, therefore I can use my energies to do other things.”

Mr Quinn said the entire “landscape” of Irish education has changed over the last 30 years and that 90 per cent of young people now stay on to sit their Leaving Cert.

“We don’t need a state examination at age 15 in the middle of the six years of post-primary education because we don’t want young people to leave school.”

Mr Quinn said other educational stakeholders, including boards of management, parent representatives at national and primary level, and patron bodies, are fully engaged with the proposed changes to the Junior Certificate exam.

He reiterated that the proposed JCSA (Junior Cycle Student Award)would consist of an examination paper counting for 60 per cent of the final mark, while the other 40 percent will be marked through projects and continuous assessment.

“This is in line with best international practice. Very few other countries have a state exam in the middle of six years of post-primary education.”

“The present system doesn’t capture most of the attributes that young fifteen-year-olds are developing and engaging,” Mr Quinn added.

“Teamwork, excelling in sport or drama or music... It’s not being captured and assessed properly. You’re being measured on how well you perform in a three hour paper at the end of three years of study.”

The Minister also spoke about the new grading system for Leaving Cert exams aimed at reducing the culture of “teaching to the test” and rote learning in secondary schools. He said the current marking system has a “distorting effect” on the way exam questions are prepared, and added that the quantity of CAO courses available to school leavers is “bewildering.”

“The amount of courses on CAO form has increased from about 450 to over 1100,” said Mr Quinn. “It means there’s too much choice and the choice is difficult to understand.”

“What we would like to see is for young people going to third level colleges to do more of a foundation course in their first year and then make their choice about specialisation, as is the case with engineering.”