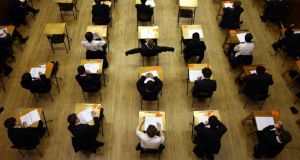 In his budget speech, Mr Howlin said there would be no changes to the pupil-to-teacher ratio and primary or secondary level. Photograph: David Jones/PA Wire

The Department of Education has been granted permission to take on some 1,250 new teachers, Minister for Public Expenditure Brendan Howlin has announced.

The department said the number of new teachers hired may rise as high as 1,400 as the State attempts to address rising pupil numbers.

The overall education budget is to fall by some €31 million in 2014 to about €8.7 billion. Minister for Education Ruairí Quinn was understood to be facing cuts of €100 million before the overall adjustment figure was reduced.

In his budget speech, Mr Howlin said there would be no changes to the pupil-to-teacher ratio and primary or secondary level.

The department said a €25 million cut to third level funding announced last year, which was to be restored in 2014, will not come in until 2015.

“The Higher Education Institutions are expected to continue to deliver the same level of services by more prudent management of their existing cash balances as they are doing at present,” the department said.

An additional €5 million is to be invested in a book rental scheme, with the funds coming from the sale of the National Lottery Licence.

“These funds will be paid to schools in the form of a seed capital grant, with DEIS schools receiving €150 per child and €100 per child in non-DEIS schools, to set up book rental schemes,” the department said in a statement.

“As we come to the end of Ireland’s bailout, I firmly believe that protecting the education system is one of the best ways to invest in our economic recovery,” Mr Quinn said.

“Education is no different to other areas in needing to contribute to the stabilisation of the nation’s finances and this year, the Government is making it very clear that education is important to us.”