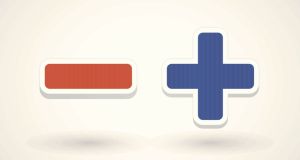 The Department of Education’s professional development service for maths teachers also provides a list of age-specific maths apps for iPad: just Google “Maths apps for Irish primary schools”. They’re all designed to be interactive and engaging, and may be particularly useful for building up the skills of children who are struggling.
IXL Maths Practice
(iPad/iPhone, Android, free)
Possibly the most relevant of all maths apps for Irish students. This carefully tracks the core curriculum from junior infants right through to sixth year of secondary school. Five-year-olds will count the number of dots on the screen, while those in fifth year will be looking at logarithms and trigonometry. There’s plenty of visually engaging material and word problems. On the downside, however, much of the content is perhaps too close to the curriculum, so it might be a bit dull for some users, particularly older pupils. The app is free for limited use, but IXL membership offers added benefits. See ixl.com for details.
Suitable for: all primary and secondary school pupils, as well as adults who would like to improve their maths skills.
Mystery Math Town
(iPad/ iPhone, €3.99,  developed by Artgig Studio)
An engaging game for children aged five and over. It’s part maths and part hide-and-seek, with a curious ghost rescuing fireflies, talking to townspeople on the way and unlocking rooms and passages. Players start with the answer and use a combination of numbers to solve the problem. A sneaky way to get kids to do extra maths; they’ll barely even notice there are numbers involved.
Suitable for: ages five to eight.
Number Monster
(iPad/ iPhone: €2.99, Android: €3.25, developed by Wombi apps)
This is a fun, simple and interactive game that helps preschoolers to learn to count from one to 20. A chatty monster talks children through the steps they need to take, and to suit children of differing abilities, parents can also enable visual cues at a setting.
There are two levels in this visually appealing game. It doesn’t do much beyond the basics, however, so much of the value lies in the game element.
Suitable for: ages two to five.
Symmetry School: Learning Geometry
(iPad/ iPhone, €3.99)
This brain-teasing game, designed by Irish firm PixelSoup, is for children of all abilities and levels. It focuses on geometry, getting kids to explore symmetry and shapes through puzzles. Kids who use Symmetry School will build on their capacity for spatial reasoning, problem-solving and visualisation. (It’s also possible that a journalist or two might also have enjoyed playing with this one. Ahem.)
It’s a great success story for Irish app developers, having shot to the top of the iTunes education app charts in its first week of release. Not the cheapest app out there, but worth the price.
Suitable for: ages four to nine.
Math Workout
(iPad/iPhone, Android, free)
A few years ago, brain-training games were in vogue. Interest has waned somewhat, but adults should try and keep their reasoning and logic skills sharp, and maths is a great way of doing it. Math Workout was inspired by the Japanese Kumon education method, which is becoming increasingly popular in Ireland and across the western world. It features daily brain-training exercises and maths drills.
It’s easy to see why this hugely addictive and enjoyable game is so popular. You’ll be keen to beat your own scores and improve; I’ve been skipping coffee during the mid-afternoon slump and playing Math Workout instead.
Suitable for: teens and adults
YOUR FAVOURITE APP: If there’s a great educational app you’ve found that you’d like to share with other readers, please use the comment box below.