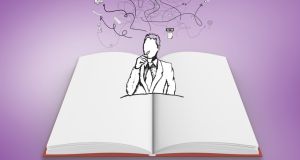 Rory’s Story Cubes
(iPad/iPhone: €1.99, Android: €1.79)
Developed by Irish woman Anita Murphy and her husband, Rory O’Connor, this is one of the most popular education apps out there, and deservedly so. Rory’s Story Cubes is a game designed to spark the imagination and can be played with equal relish by children and adults, together or separately. It can be played in a group or alone. The game consists of 54 images on nine cubes, with each cube generating an image that will feature in a story, which helps build creativity, critical-thinking skills, problem-solving, and literacy development. And it’s fun. Almost three million story cubes have been sold worldwide.
Suitable for: all ages.
Endless Alphabet
(iPad/iPhone: €6.99, Android: free, but with in-app purchases, Windows: free)
A popular and fun app for building up the ABCs of younger children. There’s an interactive puzzle to go along with each word, including talking letters and a short animation. There’s no pressure such as high scores or fails, so children can explore it at their own pace; maybe not one for parents who want to push their kids a bit harder.
Suitable for: ages two to six.
Balloony Word
(iPad/iPhone: free, developed by KwikApps)
A twist on a hangman-style game where, instead of a comical take on the death penalty, players have to keep a balloon-holding gorilla afloat. There’s a focus on vocabulary and spelling.
Suitable for: ages six to 10.
My First 101 Words
(iPad/iPhone: €1.99, developed by Blueprint.tv)
Another one for toddlers learning their words, but rather than touch, text and voice, these words are demonstrated through video clips, and there’s a host of interactive features.
Suitable for: toddlers.
Dyslexia Quest
(iPad/ iPhone,€1.99, developed by Nessy Learning Ltd)
One of the best apps for young people with dyslexia, unfortunately confined to iOS platforms. Dyslexia Quest consists of six games that develop learning abilities and can email results to teachers and/or parents. It talks users through difficulties and shows where improvements can be made.
Suitable for: three age ranges: seven to 10; 11-16; and 17 and up.
BBC Skillwise
(website)
Not an app as such, but a useful website full of practical literacy skills for adults, including how to discern between fact and opinion; the sounds of English; recognising letters and words; and reading for pleasure. See also the National Adult Literacy Agency for further
YOUR FAVOURITE APP: If there’s a great educational app you’ve found that you’d like to share with other readers, please use the comment box below.