Planned strike next month over reforms to affect up to 300,000 students and parents 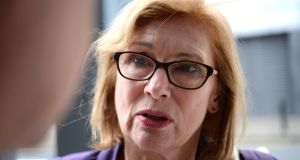 Minister for Education Jan O’Sullivan on dispute with teachers’ unions: “I’ve put a very significant amount on the table and nothing has come back from the other side.” Photograph: Cyril Byrne/The Irish Times.

Minister for Education Jan O’Sullivan has refused to offer further concessions to teachers’ unions who are planning to stage one-day strikes in protest over education reforms.

Secondary school teachers have organised a day’s strike action on December 2nd and a further day of strike action in January 2015, the date of which has yet to be decided.

The move would affect up to 300,000 students and their parents.

The action centres on plans to make teachers assess 40 per cent of students’ marks under a new junior cycle certificate.

Teachers’ unions, however, say the move is aimed at saving money and say the current system of external assessment should be maintained.

Speaking today, Ms O’Sullivan said she had made significant concessions to her planned reforms but was now unable to offer any further changes.

“I’ve put a very significant amount on the table and nothing has come back from the other side,” she told RTÉ’s Saturday with Brian Dowling.

“We can’t go back to the idea that we don’t have any assessments in schools without teachers invovled,”

The concessions, she said, included reducing teachers’ assessment from 100 per cent to 40 per cent of marks in a new exam and ensuring a new certificate is supervised by the State Examinations Commission.

But Gerry Quinn, president of the Teachers’ Union of Ireland, said the move was aimed at cost-cutting and insisted students fared well under the current system.

He rejected suggestions that students were being unfairly caught up in an industrial relations dispute.

Ms O’Sullivan, however, said the reforms were not aimed at saving money and had been on the table since 1999.

Instead, she said the changes were aimed at creating a more positive learning experience for young people.

Measuring students’ ability in a single written exam at the end of three years of secondary school education was an outdated approach to education.

Other countries which are performing well in education offer more continual assessment which involves students’ teachers, she said.

Ms O’Sullivan said that while she has gone as far as she can in addressing parents’ concerns, she was willing to engage with teachers on the basis of her revised proposals.

Mr Quinn said teachers were willing to engage on a wide array of other education reforms, but were opposed to changing the external assessment system.