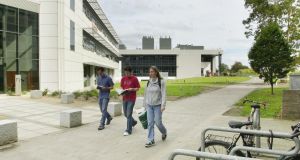 The number of degree courses requiring 500 points or more has jumped to a record high in this year’s Central Applications Office (CAO) listings.

This is despite pledges by universities to help dampen the points race by broaden entry routes into college courses.

The growth areas mirror sectors of the economy that are recovering, with students adjusting their first preferences based on the changing job market.

Points for engineering, for example, have risen across the board. One of the highest points rises for any course is at UCC, where general entry engineering jumps by 75 points to 490.

UCD and Trinity both see five -point rises for engineering, with courses up to 515 and 500 respectively. Only NUIG’s engineering degree records a slight drop, with points down slightly from 450 to 445.

For the second year in a row, there have been big increases in construction-related courses as students take notice of skills shortage warnings.

But there is also continuing evidence of institutions inflating CAO points by putting on niche courses with a very small number of places.

Figures obtained by The Irish Times under the Freedom of Information Act indicate that more than 10 per cent of honours degree courses listed by universities and institutes of technology are taking in fewer than 10 students.

Philip Nolan, president of Maynooth University, has criticised other universities and institutes of technology for “manipulating” the CAO system by offering courses with few student places in order to drive up points requirements .

He says Maynooth University has moved to reduce the number of courses and create broader entry routes which had led to a slight decrease in points many of its courses this year.

Mr Nolan said this reflected an increase in intake and its strategic decision to significantly reduce its number of entry-routes, from more than 50 to approximately 35.

“We radically reduced the number of separate CAO entry routes, leading by example, and are dispelling the fallacy that high points courses admitting small numbers of students are somehow more prestigious or better than a broader education, and are more attractive to students,” he said.

Latest figures indicate there are more than 130 courses with points requirements in excess of 500 points.

This is up from about 112 in 2016. A minority of these courses include additional points for portfolio work or, in the case of medicine, the health professionals’ admissions test (Hpat).