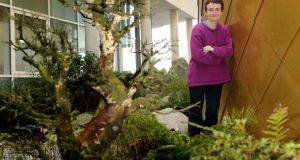 Monday
Midway through the semester at the University of Limerick and

good intentions of getting in early do not materialise. At 8.50am I get the last parking space near the languages building. Spend half an hour getting on top of emails, and mark fourth-year translation assignments. Get a call from Prof Nashimoto, who is here with a group of students from Hosei University in Tokyo. He was one of the first people to teach Japanese at UL during the 1990s, and I like to show him that we’re keeping things going.

In the early 1990s, there was a bit of a Japanese boom in Ireland, rather like Chinese now, and it was mainly in business courses. We still have a business with Japanese degree, but most of our 70 or so students are now in humanities. After arranging to meet Prof Nashimoto later, I Skype some students who have just started work placements in Japan to check they are settling in. Work placements are a big part of degrees here, but the Japanese do not have a tradition of paid work experience, so we work hard to find placements .

I have a third-year class at 11am where we do listening, reading and a bit of review. Then more marking and preparation for the 1pm class with first years. Many are fans of Japanese animation, and though they have just started learning the language, they joke with each other in Japanese.

Learning to read and write kanji, the character set the Japanese borrowed from China over 1,000 years ago, is one of the biggest challenges for learners of Japanese everywhere. Somebody once compared it to filling a bath with a hole in it – all of us have to keep at it all the time.

After lunch I discuss final-year projects; one student is starting, one is finishing. It’s 10,000 words and some find it daunting, but the mature student seems clear about his project on motivation in language learning, while the other student is handing in her project this week and has a few queries.


Meet with a colleague from Technical Communication about developing web-based materials to teach Japanese writing systems to beginners. We have developed materials to teach the two phonetic writing systems but now we are looking at the 100 kanji on the Leaving Cert syllabus. They are not phonetic, so we have to think of another way to design it. There are 36 post-primary schools teaching Japanese, in Transition Year and for Leaving Cert (about 300 take the exam each year), and short courses are being developed for the Junior Cycle.

I prepare a reading for first years on manga, Japanese comics about a huge range of subjects, from history to economics to cooking. There are manga fans of all ages all over the world and interest in animé, manga and martial arts attracts a lot of students. I did judo (badly) as a child and never thought I’d be able to travel to Japan. I went there in 1989 on the Japanese government’s Japan Exchange and Teaching (JET) programme. I went (as I thought) for one year and stayed for 10.

I need to get in touch with a fourth-year student who has entered the Japanese Speech Contest which is on in Dublin on March 22nd. She has written a five-minute speech and we should do some practice. The speech contest is organised by the Japanese Teachers of Ireland and the Embassy of Japan. Schools all over Japan have English-language speech contests every year, and when I was teaching in Japan, helping pupils prepare for these contests was part of the job. The contest here is always interesting, especially seeing the energy of the post-primary contestants who have just started studying the language. The topics in the open category range from classical literature to the differences between sign language in Japan and elsewhere. Contestants field questions from the judges after their speeches, to expand on their topics, and it must be nerve-wracking for them.


Wednesday
An email from someone working in a German company in Co Limerick about evening classes in Japanese or Chinese. Unfortunately, I tell him our evening programme, which had classes in seven languages including Japanese and Chinese, was a victim of cutbacks some years ago. There are also queries from prospective students about the BA in Applied Languages. I’m the course director so these mails come to me. Many ask what I think the points will be for the course, a question I cannot answer. Then, there is the external examiner’s visit to organise for April, and news that the Minister for European Affairs Paschal Donohoe will be visiting UL next week to talk about opportunities for graduates in European institutions. Since many of our applied languages students are doing three languages, this looks like a good chance for them, so I must remind them.

Then (at last) I get started on some research on migration to Japan. It is a fantastic change of pace to put teaching and administrative work aside, but it takes a bit of time to clear the head. I mainly do research and write about Japanese literature, materials development or language acquisition, but Japan’s ageing population and shortages in the workforce make migration issues there interesting.

Thursday
The first thing is training on how to schedule information into the system to timetable next semester. I notice when going to the computer lab that a lot more staff are carrying homemade lunches to work, another sign of the state of the economy perhaps. I am rarely organised enough to bring lunch to work, but enjoy it when I do. Lunch is a sandwich from a café here, and I eat while preparing this afternoon’s teaching. It would have been a riceball or a box lunch with rice, fish and pickles when I was in Japan, but now some green tea at breakfast is my regular contact with Japanese food.

There is a department meeting, but I’m be in class while it’s on, so I’ll find out later what happened. We do some listening and rapid reading practice and talk about a short story by Haruki Murakami. He is well known in translation, but students enjoy being able to read the real thing.
Friday:


Another quick meeting with my Japanese colleagues to discuss students’ progress but also to plan end of term oral and written exams. I need to do a bit of reading about Japanese history as I am covering with the first years how Japan opened up to the rest of the world after 250 years’ seclusion

. Three hour’s teaching today and I could stay in late this evening marking exams, but I decide to go to the chamber orchestra concert in the concert hall instead.

n The 12th Japanese Speech Contest is on Saturday, March 22nd, noon-4pm, at t he Clock Tower, Department of Education and Skills, Marlborough Street, Dublin 1. It is free and open to all. jltireland.com

The 6th Japanese Film Festival is in Cork, Galway, Limerick, Dublin and Waterford April 3rd-17th, organised by the Embassy of Japan, access>CINEMA and the Ireland Japan Association.