Students of St John the Evangelist National School come from all over the world, from different backgrounds and religions

Students of St John the Evangelist National School come from all over the world, from different backgrounds and religions. We talk to the students and teachers about their school day. Video: Daniel O'Connor 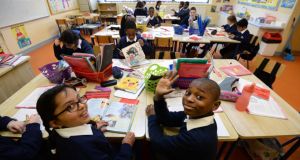 The biggest challenge of running St John the Evangelist National School in Adamstown, south of Lucan, Co Dublin, has “nothing to do with the profile of the children and families in the school. The challenge was starting something from scratch and trying to make a success of it,” says principal Tony McGinley.

More than 90 per cent of the student body is from a non-Irish background, according to data in the annual census carried out by the Department of Education for the 2013-2014 school year.

St John the Evangelist is one of the disproportionately small number of schools that educate the majority of students from immigrant backgrounds.

McGinley said the school’s population has been this multicultural since it opened its doors in 2007 to 59 students and four teachers. It now has 360 students and 25 teachers.

“We’re the fastest-growing Catholic school in the country. So that’s been the biggest challenge: dealing with such rapid growth and the evolution of the school in such a short period of time,” he says.

“We’re very proud that we’re an inclusive school. It reflects the ethos we have here as a Catholic school. We’ve fully embraced the multicultural nature of our school, and it’s something we celebrate.”

The families in the school come from all over the world, from different backgrounds and religions. There is a “large African population but from a variety of African countries”. There are also many children with Filipino and Indian backgrounds.

Concentration of children of non-Irish origin in primary schools

Twelve per cent of the students are Muslim, and about 60 per cent are Catholic. Many of the Catholic students are from the Philippines, India, African countries and eastern Europe. There is also a large Christian, non-Catholic population.

“Even though many families are not Catholic, they want their children taught in a religious-ethos school. So we cater for children of all backgrounds and all creeds.”

The school deals with religion in a “respectful manner”, says McGinley.

During Catholic religious instruction, for example, teachers try to have another activity for the Muslim, Sikh, Hindu and other children in the same classroom. The school hasn’t had requests for children to be withdrawn from religion class.

“We’re doing what I feel is a very good job . . . We’re in a situation that is relatively unique. There are only a handful of schools with our profile. It’s a new experience for everyone.”

“English is spoken in a lot of [students’] homes, but the majority would have a language other than English or Irish spoken as well,” says McGinley.

There are a number of language support programmes offered at the school for EAL (English as an additional language) students. There is a focus on early intervention.

Guided reading is a school-wide programme that teachers conduct daily in every class. Literacy Lift Off is taught to senior infants and first-class students, and the Aistear programme is taught daily at junior and senior infant level. The school also uses the one-to-one programme Reading Recovery.

“You might get a child coming into fourth or fifth class with no English. In a situation like that, you have to put something in place specifically for them,” says McGinley.

“When a parent hands a child over to a school, their expectation is you’ll do your very best for that child, no matter what their background. Our parents would have very high expectations for their children, and so would we.”