Minister says junior cycle reforms will go ahead despite protests

Education Minister Jan O'Sullivan announcing she intends to continue rolling out the planned new junior cycle programme without the agreement of teacher unions while at the Labour Party annual conference. Video: Bryan O'Brien 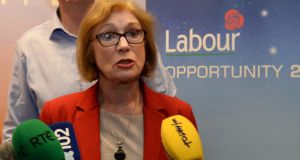 Minister for Education Jan O’Sullivan has declined to say whether teachers refusing to implement the junior cycle reforms will be disciplined. Photograph: Cyril Byrne

Minister for Education Jan O’Sullivan has declined to say whether teachers refusing to implement the junior cycle reforms will be disciplined.

Speaking to journalists at the Labour conference in Killarney, Ms O’Sullivan said she was not talking about discipline.

“What I am talking about is implementing a policy that is needed for the schools,’’ she added.

She said she was encouraging teachers to engage with the process which had gone a long way to addressing their concerns. The further proposals from talks chairman Dr Pauric Travers had gone further, she added.

“We cannot continue to negotiate forever,’’ the Minister said.

She believed, she said, teachers would do their professional job and engage with the curriculum.

The minister also said she intends to continue rolling out the planned new junior cycle programme without the agreement of teacher unions, saying “one group cannot have a veto on the reforms”.

She was commenting after the two unions representing secondary teachers, the ASTI and TUI, refused to accept a compromise plan put forward by Dr Travers.

The teacher unions said they were seeking further amendments to the document, which had been put forward by Dr Travers after several rounds of talks had ended without progress.

The two unions agreed to suspend their threat of another strike date but are keeping their industrial action in place, which includes non-cooperation with teacher training for the new syllabus, and with the roll out of short courses in subjects like Coding and the Chinese language.

In a statement, the Minister said she “deeply regrets the failure of the unions to accept what was a fair and reasonable compromise, put forward by the independent chair.

“Dr Travers requested that both parties would either accept or reject his proposals as a basis for agreement, not as a starting point for negotiation,” she said.

“Also central to Dr Travers proposal was a suspension of industrial action by both unions, a step they have failed to take.”

The Minister said on Monday officials from her department would meet other education partners, including students, parents’ representatives and management bodies, “all of whom are positive towards the Travers proposals”, to update them on her implementation plans.

The decision by the ASTI and TUI to seek further concessions within Dr Travers’ document was made after 12 hours of intense and sometimes fractious talks between the executive bodies of the two unions.

In a statement released after 2am on Saturday, the unions said they “accept that the document produced by Dr Travers, while not representing a comprehensive resolution, represents a basis for further intensive negotiations”, with a focus on key issues.

It identified these key issues as:

* Parity of treatment of subjects;

* Confirmation of CSPE (Civic Social and Political Education) as a state certified exam;

* Issues relating to capacity including time, workload and other appropriate resources.

Crucially, the unions refused to accept the notion of teachers assessing their own pupils – a key plank of the reforms, which originate in a 2011 recommendation of the National Council for Curriculum and Assessment.

In their statement, the unions said they had “decided not to proceed with a strike day at this time. However, because of the absence, so far, of meaningful progress on the key issues above, the current directives in relation to the Framework for Junior Cycle remain in place.”

They added: “If there is meaningful progress in relation to the key issues, the unions are prepared to re-visit the issue of non-cooperation.”

Under Dr Travers&#8217;s plan, which he described as the basis for “an honourable settlement”, the new junior cycle would be split in two where one part would be marked by the State Examinations Commission through the traditional format and the other part would come from teacher assessments, carried out in the second and third year of secondary school.

In addition, the planned new Science specification would be delayed until September 2016 to give teachers more time to adjust to the new system, and a new, compulsory programme of “Well-Being” would be made a central part of the secondary curriculum.

This would incorporate CSPE, which teachers had claimed was being downgraded under the reforms.

Ms O’Sullivan said she had written to Dr Travers to confirm that she had accepted his document “Junior Cycle, The Way Forward” as a basis for agreement.

She added: “the fact that both unions have failed to accept the compromise proposals without balloting their wider membership on what is significantly different proposal from that put to them for consideration previously is a matter of concern.”

In addition, “the failure to suspend industrial action raises the prospect of more unnecessary strike action. It also deprives teachers of the opportunity to receive training for a reformed and enhanced junior cycle.”