Martin Mansergh: It would be rash to kill denominational schooling

Opinion: Doing away with denominational preference could lead to the takeover of most Protestant-run national schools 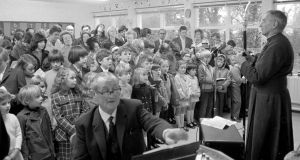 The Most Rev Dr Buchanan, then archbishop of Dublin, at the opening of St Andrew’s School in Lucan, a school under the patronage of the Church of Ireland, in 1972. Photograph: Dermot O’Shea

Primary education is a sector where history has quite a lot to teach us. Repeatedly in the past, apparently idealistic intentions have been frustrated by powerful religious forces that preferred to demarcate clearly and control their people, rather than accept a shared space that would inevitably have also been a diluted one.

When religion largely went unquestioned and practice was the norm, albeit in separate denominational compartments, schools were an important and integral part of a system that underpinned religious conformity across society.

The national school system was created in 1831 under chief secretary Sir Edward Stanley, later Lord Derby, a future prime minister. The national education system was to be Christian in character but nondenominational. It was initially largely supported by the Catholic Church, because it replaced on the one hand a public system with a pronounced Protestant bias and on the other the informal, ad-hoc and privately run “hedge schools” catering for the Catholic population.

However, within about 20 years, as a result of pressures from all main churches – Catholic, Anglican and Presbyterian – denominational education became firmly preferred. Unequivocal support for denominational education was one of the pledges Charles Stewart Parnell gave to the parish priest of Rathdrum in 1875, when he wanted to enter political life.

When Northern Ireland was established, the first minister for education, Lord Londonderry, tried again in 1923 to create a unified primary school system from a religious point of view. Within a couple of years, he too had to retreat. Each of the main churches wanted its children to receive clear, unfudged teaching when it came to religious education, at a time when the churches were furthest apart.

The Irish Constitution, in articles 42 and 44, stresses the rights of parents in an educational context in the matter of religious and moral formation and explicitly refers to denominational schools.

Interestingly, it also protects “the right of any child to attend a school receiving public money without attending religious instruction at that school”. In general, the boundaries were sharply defined. It will be recalled that insistence on a child of a mixed marriage to be brought up as a Catholic was a big issue in the 1957 Fethard-on-Sea controversy, when the mother wanted to change her mind about this.

Conflict in the North

With the development of ecumenism in the 1960s and even more the outbreak of conflict in the North, there was a movement among the more liberally minded to advocate multidenominational or integrated education. In the Republic, with the improved atmosphere between the churches, more Catholic parents were willing or wished to send their children to Protestant-run schools, where places were available, and equally, Protestant parents had less inhibition about sending their children to Catholic-run schools, again where there were places and where it was more convenient.

To this day the vast majority of national schools in the Republic are denominationally run, but in the North the distinction is between state schools (de facto Protestant) and voluntary schools (Catholic), with only a limited take-up of integrated education.

For different reasons, nondenominational education has made slow headway in both parts of the island. In the Republic, until recently, religious minorities had been small, and many parents from that background still preferred to send their children to a school under Protestant or other religious management. In Northern Ireland, particularly in larger towns and cities, it is not easy to travel from segregated housing to integrated schools, particularly where security issues may arise.

There is also resistance to integrated schooling, if seen as an instrument designed to break down the religious and political cohesion of the Catholic community. The Catholic Church in Northern Ireland vigorously defends Catholic schools and has seen off attempts to force change.

In the Republic, pressure comes from three sources: growing multiculturalism connected to immigration; demographic pressures, particularly in the Dublin area, allied to underinvestment in additional capacity during the crash years; and finally, a significant number of people rejecting religion, with the result that the term “non-Catholic”, which used to mean Protestant, today signifies people who object to religious impositions.

The present situation in effect requires of parents at least to practise what would have called “occasional conformity” in the 17th century, so that their children qualify for a place in a denominational school, given there is a shortage of other places available.

The solution mooted three years ago, as advocated by Archbishop of Dublin Dr Diarmuid Martin, of the Catholic Church divesting itself of a certain number of schools, at a time when the State had very little money to invest in new buildings and premises, seems to have run into the sands, but remains necessary, along with the creation of new State-run, largely secular schools where there is a clear demand.

The time for the State hiding behind the churches or assuming everyone is religious is long past. Meanwhile, there is nothing unhealthy about requiring larger schools to accept some children in acute need of a place from a different cultural background, such as the case of a Hindu child publicised recently.

The fundamental question, though, is whether we want to adapt and broaden the present system or scrap denominational education altogether, even though that is hardly a practical option in the short to medium term and would require constitutional, not just legislative, change.

In large parts of the country, the subject is simply not an issue. Straightforward scrapping of denominational preference in the intake of students might well solve the problem of the right of convenient access to school places for non-Catholic children, but it could also lead to the rapid takeover of most Protestant-run national schools, particularly in urban areas, something seldom referred to in any of the public argument.

It would certainly be ironic if religious pluralism in education were to be the first victim of radical liberalisation.

In practice, one assumes that the Minister for Education will negotiate moderate changes with the interested parties. The prospect at present is more one of introducing an explicitly secular element, rather than substituting a secular hegemony.