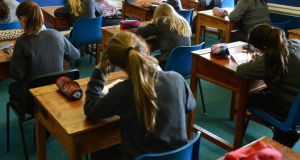 With questions that drew real life into the maths exam, Project Maths is doing what it says on the tin: drug trials, unemployment and charity fundraisers all greeted higher level students in maths paper two.

According to the Institute of Education’s Aidan Roantree, the exam was not as accessible as paper one. “The amount of language used made it trickier than Friday’s paper,” said John Brennan of the Ballinteer Institute and projectmaths.com.

Overall however, the paper was still “well thought out and manageable”. Most students would have been able to perform at least adequately in the exam as there were enough sections that were “doable” Roantree said.

“There were a lot of proofs and concepts examined and this was very much a paper in the “Project Maths” spirit - very unlike the the old syllabus,” said Eamonn Toland, founder of TheMathsTutor.ie

The first section tests concepts and skills. True to form - Project Maths students are told to expect the unexpected in exams - the first two questions asked about trigonometry rather than the probability and statistics of previous years.

Students would have been stretched, particularly on question four. “Physics students found that question suited them,” said Brennan.

Section B of the paper tests contexts and applications. Question seven would have been a challenge, according to Roantree, not for mathematical reasons, but rather because of the number of verbal answers required.

Toland said the section was very biased towards statistics. “Students who were a bit weak in this area may have struggled,” he said.

In a question that asked students to analyse employment data, Toland identified a possible problem. “Several of the questions ask for subjective opinions and there may well be no clearly correct answer,” he said.

A question on drug trials and blood tests was described as “lovely and well flagged”, while the question that came next - a co-ordinate geomerty question based around the design of a clock - was “fascinating”, according to Roantree.

Opinion about the ordinary level paper was divided. Some teachers believed the paper was more challenging than Friday’s paper one, while others thought it was less so. “The examiners were obviously trying to keep the paper topical with questions based on property tax and on wind turbines,” said Toland. “But they didn’t overdo the wordiness of these questions and students should have been well able to understand the underlying mathematics.”

Well prepared students would have had little difficulty with section A, according to Jean Kelly, maths teacher in the Institute of Education. Most questions in section B would have been familiar to students who were familiar with past papers, Kelly said.

(i) Use a hypothesis test at the 5% level of significance to decide whether there is sufficient evidence to justify the company’s claim. State the null hypothesis and state your conclusion clearly.

(ii) The null hypothesis was accepted for Drug B. Estimate the greatest number of patients in that trial who could have been successfully treated with Drug B.