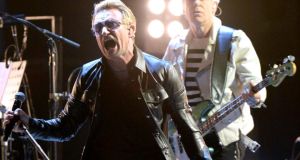 The grinning face of Bono loomed large as just under 54,000 students kicked off the Leaving Cert exam this morning.

The U2 frontman’s speech to a graduating class at the University of Pennsylvania popped up on the higher level English paper one, with the rock star sharing his wisdom and life hacks. Alas, say teachers, it wasn’t a particularly good speech.

“It’s not the best speech I’ve ever read in my whole life,” said Fintan O’Mahony, a teacher at Scoil Mhuire, Carrick-on-Suir. “Structurally, it was all over the place. That said, there was room for students to criticise his talk.”

A total of 38,177 students took this year’s higher level paper, which had the theme of “challenges”. Other comprehension questions involved responding to a Guardian newspaper article on the difficulties faced by writers of ghost literature in an age of reason, or an extract from a memoir by novelist Penelope Lively about the challenges of aging. Essay questions included a short story on the challenges of aging, a magazine feature on romance, and a personal essay on time travel.

In the composition section, O’Mahony said the essay asking students to write a “thought-provoking” speech to the United Nations on the challenges of our age may have put some students off. Students also had the option of writing an angry letter to the school principal who has decided not to hold a graduation event.

Although the exam was set months ago, the chance of writing an essay on “the importance of privacy in people’s lives and the challenges to privacy in the modern age” may have been a godsend for any students who have been following the controversy surrounding media mogul Denis O’Brien’s banking affairs in recent weeks. O’Mahony, however, questioned whether students would have had time over the past few weeks to follow the news.

Jim Lusby, an English teacher at the Institute of Education in Dublin, said English (higher) paper one was “unexciting if comfortable. It shouldn’t be challenging in an unexpected way, but it should be challenging in the sense of being inspiring and stimulating for students.”

Lusby said the comprehension section was “immensely comfortable for the well-prepared student”, but the set questions, where students are asked to write a letter, article or an introduction to a book, are outdated. “These formats continue to lag behind the times for most young people, few of whom ever write such pieces and most of whom express themselves in quite different formats.”

Around 15,786 students sat this year’s ordinary level English paper. The three texts presented candidates with enjoyable pieces of writing from Irish authors Roddy Doyle, Brendan O’Carroll and Christine O’Dwyer Hickey. “It was a very successful paper,” said Lusby. “The general theme - parents/guardians - would have been immediately familiar and comforting for all candidates, but also intriguing and inviting.”

He commented that “some of the many non-Irish nationals taking the paper, however, may have been a little fazed by the consistently green hue of the material”. But the comprehension questions set on the texts were “pretty near perfect”.

Lusby added that the question B tasks, which included a letter of application, a podcast on injustice and diary entries about a misunderstanding, allowed candidates freedom for engaging self-expression with familiar genres. He said the composition questions - on deception, difficulty, responsibility and passion - were “generous and stimulating”.