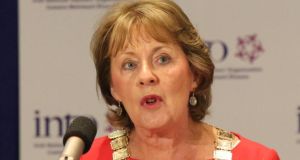 INTO president Emma Dineen: talked of primary school children wishing that homelessness would be eradicated from Ireland. Photograph: Mary Browne

Children attending primary school are falling asleep in class due to the impact of homelessness on their lives, the INTO conference heard on Monday.

One delegate attending the opening day in Wexford said he believes at least half of the children he teaches in Dublin 15 are at risk of homelessness due to rent increases and pressure on supply of rented accommodation.

TJ Clare, a teacher of second class in Blanchardstown, Dublin 15, said he reluctantly lets homeless children sleep in class. He said these children were falling asleep due to living in cramped hotel rooms with parents and siblings and not eating or sleeping properly.

Next week, he will return to school from the Easter break and find out if any children in his school face eviction from Tyrrelstown, in west Dublin, following a decision by a “vulture” fund to sell their family homes, he said. “Families from our area are being forced into emergency accommodation in inner-city Dublin and they are having to take two buses to school,” he added. One family, a single mother with three children, became homeless before Christmas.

“You can never get away from your siblings or your parents, and parents can’t get away from their kids; it leads to all sorts of problems.” Both teachers have seen children who were once happy and social become disengaged and isolated, and their attention drifts.

“It once might have been called daydreaming, but actually they’re just taking a break in their heads,” said Mr Clare.

“School becomes their refuge, the only constant. We encourage the child to keep up their homework, not least because it’s good for them to keep a routine.”

But, with the best will in the world, it’s not always possible to even find a space to work in a small hotel room, Mr Kerr said.

Children can be moved at short notice. One morning, a child in Mr Kerr’s class was dropped to school by his parents and, later that day, the child discovered they had been thrown out of their emergency accommodation and made homeless again. That evening, his parents were scrambling around for a place to live.

This is an issue of genuine and real concern to children, who not only see their friends without a place to live, but increasingly see homeless people on the streets of Dublin, said Mr Kerr. He has been teaching for 30 years, but the problem has become worse than ever. “It’s stressful enough for an adult to deal with, so how is a 10-year-old child supposed to process it?” he asked.

INTO president Emma Dineen said that when primary school children had been asked to reimagine the 1916 Proclamation and its call to “cherish all the children of the nation equally”, she was struck by the number who wanted homelessness eradicated from Ireland.

“When children notice, we need to sit up and listen. Children, teachers and staff are now seeing the physical and psychological effects homelessness, emergency accommodation and the direct provision system are having on the pupils in their classrooms and under their care. Lack of sleep, lack of healthy diet, lack of space to do homework and to play, and inability to ask a friend around to play, all impact negatively on our future generation.”

This is my second year to attend congress. One big issue for many teachers this year is the unequal treatment of newly qualified teachers, but another issue is the moratorium on posts of responsibility.

Back in 2009, all our middle-management structures were more or less wiped out overnight. This has led to a massively increased workload for principals, and that, in turn, has impacted on the quality of teaching.

The Department of Education is constantly introducing new measures, such as curriculum improvement. These changes can’t be implemented properly without proper management structures in schools. Teaching principals have to teach a class and to run a school at the same time.

This is also creating huge disaffection among the staff, but ultimately it is the children who are losing out. The Government is trying to get blood from a stone.

School autonomy is a big concern for me. There was a recent paper on the feasibility of school autonomy, which suggested that the Government would divest autonomy to schools in terms of curriculum, ethos, enrolment and staffing. It could be very good, and has worked well in some countries such as the Netherlands.

But the problem is that principals – who, under benchmarking, were supposed to be paid more and have not been – would be expected to implement it, and those principals are already overworked. It would also completely change the nature of the working relationship between teachers and principals, because he or she would oversee the hiring and firing of them. There are issues with setting the curriculum, where they’d have to worry about consistency of delivery.

Ethos is a big issue as well: school divestment should be dealt with before we start looking at school autonomy.

There are two big issues: seeking parity of pay for newly qualified teachers and then, for the rest of us, recouping some of what was taken from us during the austerity measures. In particular, we want to see a return of posts of responsibility.

I’m deputy principal in my school, so I wasn’t affected by the moratorium, in the sense that I already had a position. But it has affected my workload. You try to prioritise what is most important, but there is only so much you can do without the personnel to do it.

The Green Schools initiative is a fantastic way of getting children engaged with looking after the environment, but if you have lost a post of responsibility in the school, it’s quite a bit of work to co-ordinate. If you don’t have someone to do it, it may be one that has to go.

There’s no chance of promotion for younger teachers. Morale is low.

Teachers have recently voted overwhelmingly in favour of industrial action because of the moratorium on posts of responsibility. I can’t say I’m really young anymore – I’m 10 years teaching now – but I am still a relatively young teacher, and I’m still number 30 on the seniority list in the school, with absolutely no hope of any promotion or post of responsibility, or increase in pay, which might allow me to buy a house, unless I move to a different school. I really like the school I work in, and I don’t want to move.

[Following a ballot of INTO members] we have now decided to not engage with the school self-evaluation process. When a person who had a post of responsibility retired or moved school, that post went with them. The job they would have been doing – covering curricular areas, pastoral care – still has to be done. The teachers are doing it out of their own goodwill. But it is running out.