'Innovation is in our DNA' 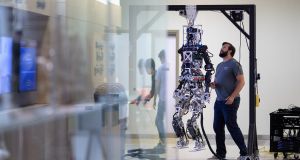 Researchers test a robot for a US competition with a $2 million prize. PHOTOGRAPH: CHIP SOMODEVILLA/GETTY IMAGES

Engineer, senior lecturer in electronic engineering at NUI Galway, and researcher with the Insight Centre for Data Analytics. He has worked in academia and in industry

“In primary school I tried making basic circuits out of old electric-blanket switches, torch bulbs and batteries. I also took apart way too many digital watches, and sometimes they never worked exactly the same when I put them back together.

“I was always interested in Stem in secondary school, having taken all possible science and maths options available. When I was a postgraduate student I set up boards.ie with some of my computer-gaming friends. I was very fortunate to have cofounders who had prior experience in setting up companies, because I had literally no idea of how to go about it.

“More recently I’ve been involved in various activities to help increase the chances of serendipity for tech start-up founders to meet with the right cofounders, because teams of founders have a greater chance of success.

“I’ve taken on the role of programme director for TechInnovate, a new technology- entrepreneurship fellowship at NUI Galway. The idea is to develop teams of technology innovators producing technology innovations across various sectors: agriculture, defence, finance, tourism, and more. It is based on the successful BioInnovate programme, which has been creating medtech innovators and innovations for five years now.

“Some of the key parts of these programmes are that teams are multidisciplinary – engineers, businesspeople, designers (and, in BioInnovate’s case, doctors) – and that the teams spend six to eight weeks immersed in the sector of interest, where they really drill down into the problems experienced in those sectors. (They then identify a key one to focus on).

“In parallel we also offer training in intrapreneurship” – entrepreneurship within a large organisation – “to our corporate partners on the programmes, many of which are prominent technology or medtech companies.

“TechInnovate also ties into my role as coprincipal investigator at Insight, Ireland’s largest ICT research centre, where I lead a group focusing on social-media research. We have hundreds of computer-science and engineering researchers in Insight, and there is great potential for exciting synergies between all of these initiatives in the future.

“Ireland has a long tradition in Stem, with key people like Kathleen McNulty from Donegal, one of the world’s first computer programmers; George Johnstone Stoney, a former professor from QCG/UCG/NUI Galway who named the electron; and George Boole, on whose logic theory all electronic computers are based.

“I believe innovation is in our DNA, and we need to keep showing the world how we can continue to innovate in an increasingly technology-enhanced future.”

“Like a lot of people in Stem I had a brilliant physics and chemistry teacher for my Leaving Cert, and she really turned me on to science.

“I studied chemistry with microbiology at UCD and then went on to a postgraduate and PhD. I was very lucky to get a chance to study in New York for my doctorate, which was looking at the reactions between molecules and how we can mix different materials, such as oil and water.

“This led to job with a research unit at Forbairt” – now Enterprise Ireland – “in developing water-based paints, which are safer and more environmentally friendly than oil-based paints.

“I presumed I would work in the pharmaceutical industry, as that’s what most chemistry graduates do. But things took a different turn: I got a job lecturing in chemistry at WIT and became interested in promoting chemistry as a career, so I got talking to transition-year school groups and encouraged them to study chemistry.

“Meanwhile my colleague Eoin Gill was doing the same for engineering. We decided to work together to increase the overall number of people interested in Stem, and so the Centre for the Advancement of Learning of Maths, Science and Technology – Calmast – was born.

“Our aim is to encourage people of all ages to become interested in Stem, and we work with children in creches as well as retirement groups. As we went on we saw that the underlying problem in drawing people to Stem was maths, and so, 10 years ago, we set up Maths Week Ireland, which runs in October.

“Last year we had 270,000 people participating across Ireland. There are so many people of my generation who say they can’t do maths, but we all do maths, whether that’s sudoku or looking at bills or working out how to get from A to B.

“Maths Week brings puzzles to the street and helps increase people’s confidence; we have maths shows and puzzle shows, and last year the concert pianist Eugenia Cheng was at the National Concert Hall, explaining about the intricate relationship between maths and music, and playing pieces of music to explain.

“Not everyone can be a Nobel laureate in maths, but we can – and do – use it all the time.”

Director of trust and safety, Google

“I always liked to build things, and as a young boy I would play with Meccano, which has stood the test of time.

“I was influenced by the achievements and interests of my dad, who is a PhD in industrial chemistry. And I had a natural aptitude for tech subjects at school: I loved trying to solve problems and figure out how things worked, so I was naturally drawn to studying Stem subjects.

“In my early days at college I worked on a computer-aided design project that modelled for microwave circuits used in the telecoms industry. When I graduated I initially worked for Accenture, as I was attracted to a role where I would solve business problems using IT.

“Since then my career has been based around IT and systems integration. I have generally worked on transformational projects with a technology basis.

“An early example of a project that I worked on at Accenture that influenced my career was an engineering-process improvement programme with Short Brothers.

“The work you do in your early career is a good indicator of how you will progress. While working on this project I learned a lot about problem solving and making sure that every element of a project would come together for a common goal.

“In my consultant role I was often thrown in at the deep end, working in an unfamiliar environment, and I had to learn very quickly how to break a problem down into its individual components and in some cases how to work across different teams and countries to solve those problems.

“Now my core job in trust and safety at Google involves protecting our users across many of Google’s key products, including search, AdWords, Publisher and social. My Stem background is applied by scaling our technicaloperations teams and support systems. I’m focused on making sure the business and technical side of our operations and projects are aligned, and I lead teams across both the Europe, Middle East and Africa region and the Asia-Pacific region.

“Outside of my core job I lead Google Ireland’s engagement with the Irish start-up community. We partner with Irish start-ups to help them grow and thrive through mentorship and networking programmes, both locally in Ireland and through the global Google for Entrepreneurs programme.

“I believe a Stem-based education fosters a healthy curiosity in an individual, helps consider solutions to problems differently and ultimately drives innovation. Ireland also has the potential to become a centre of excellence for Stem and computer-science education. One of the best ways for this to happen is to light the spark and keep it alive from an early age.”