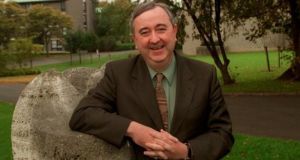 Dr Pauric Travers: “It is important that interventions which seek to address the continuing problem of educational disadvantage are targeted to achieve maximum impact.” Photograph: The Irish Times

Children’s education will suffer overall if their wellbeing and happiness is not taken into account, a leading educationalist has said.

Pauric Travers, chairman-designate of the board of the Educational Research Centre (ERC), appeared before the Joint Oireachtas Committee on Education and Skills on Wednesday.

The centre has been in existence for 50 years, but its board is new and is being appointed following the designation of the ERC as an independent statutory body.

Dr Travers told the committee that the centre’s business was assessment, testing and evaluation of educational programmes, but that what happened in practice was then a matter for the Minister, teachers, the Oireachtas and other relevant groups.

Answering questions from the committee, Dr Travers said there was an “understandable focus” on reading and numeracy, but there were other skills that affected children and adults and it was important not to neglect them.

“I think in general Irish schools are much happier places than they were 30 years ago,” he said.

He said that when attending parent-teacher meetings, teachers were often very anxious to tell him how children were getting on in tests, but what he wanted to know was whether they were happy and functional.

“Those are the things that will follow the child through their lives.”

Dr Travers said we should not neglect the holistic view of education because it would suffer overall if we did not look at the wellbeing of the student.

Ireland had performed significantly above the OECD average in maths and reading in 2012, he noted.

Most recent national assessments in 2014 had also shown “significant improvements” in the areas of maths and reading, which augured well for the future, he added.

“We certainly do well but there’s no room for complacency,” he said.

He told the committee the central challenge of any educational system was to achieve the best outcomes for individual students and the wider society within the resources available.

“Well-conceived educational research and evaluation can and should influence policy and practice in relation to a myriad of issues including educational disadvantage, special education needs, gender equality, assessment, the Irish language and student attainment.

“For example: with finite resources, it is important that interventions which seek to address the continuing problem of educational disadvantage are targeted to achieve maximum impact,” he said.

“A criticism sometimes made of the Irish educational system is that is serves the average student well but less so those near the top or the bottom. Ensuring every student reaches their full potential is an aspiration which can be realised with the assistance of good quality educational research.”

Some members of the committee expressed concern about the marginalisation of the Irish language. Dr Travers agreed there were “concerns” about overall standards in Irish over a period of time and said the ERC was “very open” to continuing to do research in that area.

The ERC was established at St Patrick’s College in the 1960s on the initiative of the Department of Education and the college.

It has a staff of 34, including researchers and support staff.