How to learn a language in lockdown

It is possible to pick up an impressive new skill – without leaving the house? 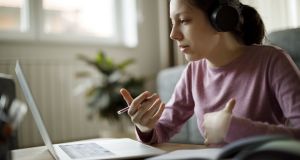 ‘The big thing is small achievable goals,” says Darach Ó Séaghdha, author of Motherfoclóir. ‘It might be as simple as going to an ATM and using the Irish language service.’

Life in lockdown? I had an early taste of it in the summer of 2016. After finishing college for the year, I found myself at home with a gap in my schedule and a need to maintain my own sanity. A language learning site had a 50 per cent sale, so, obviously, I decided to learn Greek.

And yet, more than teaching me about Plato’s cave or Alectryon turning into a rooster, I ended up intrigued at how much it schooled me about Irish, and how you don’t always need to attend a class –or even be in a country – to learn a language.

I have a good level of Irish, despite never attending a Gaeltacht, Gaelscoil, getting grinds or studying it in college; nor could my parents converse in the language.

Seeing that learning Irish is back on many of your bucket lists, after running through the mill of language pedagogy, mostly on the “cheap” and “free” end, I feel I have lessons to save you the hassle.

So how did I learn Greek? My main method was been a mix of Rosetta Stone (a paid language app), conversations with Greek friends online, watching some Greek Spongebob, reading a Mr Men book, some Skype tutorials included in my subscription, as well as a few trips to Greece for a film festival. So, what are my key takeaways?

After winning a raffle to represent my film camp at a youth media festival called Camera Zizanio at 16, I fell headfirst into the rich world of Greek culture. I continued to be invited in years that followed, and this gave me an urge to learn the intricate language – and be able to read its road signs after getting lost in the small town of Pyrgos on too many occasions.

Compared to earlier encounters, it was here I realised that language learning lives and dies upon the altar of motivation. At school, languages seem to be taught in a pressure cooker, with the impetus being to pass an exam. For Greek, it was different.

The idea of being able to read and communicate made a huge difference to my learning. In writing this article, I spoke to Darach Ó Séaghdha, author of Motherfoclóir. His book, Twitter and podcast look at snippets of Irish words, in what is usually an irreverent swipe.

“The big thing is small achievable goals,” he says. “It might be as simple as going to an ATM and using the Irish language service.”

2. Be confident with your mediocrity or you’ll never get better

There is a New Yorker cartoon that goes, “Let me interrupt your expertise with my confidence”

The special ingredient, it seems, is having the courage to look stupid.

The next time I met a speaker, I caught them off-guard with a cheery “how are things?” in my best Greek and, naturally, got a big laugh for my pronunciation.

Yet, these awkward moments are where you learn the most. They are even something to be proud of. Well, maybe.

Ó Séaghdha adds: “Once you’re in a conversation and realise a mistake isn’t the end of the world – that’s when you start properly learning.”

On my next trip to Pyrgos, I got soaked in the rain and walked into a taverna where the waiting staff could not speak English. So, I said, in my faltering Greek: “My shoes are wet, do you have any old newspaper?” To my astonishment, it worked.

The staff were impressed, and also likely welcomed the free entertainment. These innocuous interactions made months of practice worth it, and I long remember them where the people in question probably do not.

I do appreciate that in the current climate, this may not be an option.

3. Chat with other learners online

I was an attendee at the first pop-up Gaeltacht in 2016. What began as an idea for Dublin’s Gaelgóirí to go for drinks on a Thursday night, turned into an open source idea used all over the world – and even in other languages including Manx, Scots Gaelic and Cornish. It seemed to capture a zeitgeist of a new generation of Gaelgóirí who were diverse, urban and connected through social media.

The pop-up Gaeltachtaí have been put on hold for the foreseeable future, but that’s not to stop it from moving into the cibear-Gaeltacht.

For the purposes of this article, I hosted an online pop-up Gaeltacht, helped along with a newfound adeptness in video conferencing.

Seven of us dialled in from a range of locations – Laois to Limerick, London, and Belfast. I was unsure how people would react, pencilling in just 15 minutes for our experiment, though most of us ended up staying for over an hour. Success!

There are certainly kinks to be smoothed out; nonetheless, it has potential.

Besides transcending the need to share a physical space, online pop-up Gaeltachtaí have advantages that I overlooked. Some callers remarked they hadn’t been able to attend pub-based pop-ups due to work or childcare, so this could be a new way to learn.

If you would like to do some passive learning, “like” or “follow” some of the gamut of Irish media and allow them to slowly conquer your newsfeed.

These include TG4’s youth channel Bloc , as well as RTÉ’s Beo ar Éigean podcast. BBC’s Faduda is particularly good for learners, with a range of 60-second vlogs from Irish speakers around the world.

Musically, there has been a rise in Irish releases over the last five years. You can now find original music in most genres as Gaeilge. These range from the haunting vocals of Muireann Nic Amhlaoibh, to the often controversial Belfast rap group Kneecap . Nos.ie is a good resource here.

Duolingo, the lime green bird, now teaches 35 languages for English speakers. Their press office tells me that demand is presently at an “all time high” during lockdown.

Overall, I found it to be very good. Duolingo has improved how it “gamifies” its app by collecting badges and an in-app “currency”’ to buy outfits for Duo and other perks.

My main critique is the way it teaches through translation to be problematic. I think when you learn a language through the lens of another, it’s difficult to truly attain it. Duolingo is similar to the paid Rosetta Stone app, which uses no direct translation, a method I preferred.

The main thing with both apps is to ritualise them before the novelty wears off - and it does. I personally found it easiest to pair practice with a routine you already have, such as making TikTok’s or sourdough bread. Used with a mix of approaches, Duolingo can be a powerful and free resource.

Its press office says there are 969,000 Irish learners on the app worldwide. This includes regular users as well as anyone who has tried the course in the last year. They could not say how far people have taken their learning, or how many have completed the course since it launched in 2014.

In Motherfoclóir, Darach’s late father, Dónal, who spoke seven languages, suggested “an idea was like a liquid and languages were like differently-shaped glasses; the liquid would take the shape of whatever glass it was poured into’’.

For me, I’ve found learning languages broadens my mind to see the same thing in so many ways. Being able to speak Irish gives me a sense of pride, and is an inclusive expression of Irishness that can belong to anyone.

As well as Irish and Greek, I’ve had a go at a number of languages in a distinctly non-committed way, all of this facilitated by free resources. Win, lose or draw, I never come back not having felt enriched – or with a slightly better understanding of a culture by learning how they express themselves.

For those of you with time to fill, this could be just what you’re looking for. You don’t need to become fluent or gobble up gramadach gan stró, but when the pubs open again, maybe we’ll see you at a pop-up.