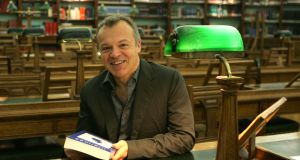 Broadcaster and comedian Graham Norton is one of three Cork men who will be conferred with honorary doctorates at University College Cork (UCC) next month. Photograph: Cyril Byrne.

Broadcaster and comedian Graham Norton is one of three Cork men who will be conferred with honorary doctorates at University College Cork (UCC) next month.

The other ‘Corkonians’ to be honoured include Irish writer and BBC broadcaster, Fergal Keane, and local businessman Dermot O’Mahoney. The fourth recipient is Irish-American US District Court Judge Donald W Molloy.

Perhaps best known for the acclaimed The Graham Norton Show, the six-time Bafta Award winner grew up in Bandon, Cork, and then studied English and French at UCC.

As well as hosting a popular programme on BBC Radio 2, the UCC alumnus hosted this year’s Bafta Awards and provided commentary on the Eurovision Song Contest for the BBC. One of Norton’s best-loved performances came in the guise of Father Noel Furlong in TV show Father Ted. He is to receive a Degree of Doctor of Arts.

Irish writer, broadcaster and BBC correspondent Keane grew up in Dublin and Cork, and has won numerous awards for his coverage of stories around the world as well as an OBE. He will receive a Degree of Doctor of Literature.

Businessman Dermot O’Mahoney has been active in the Irish business, educational and voluntary sector for over 50 years. He is a director of City Life Wealth Advisors, has served as Chairman of the Port of Cork from 2002 to 2012 and is a long-standing member of the governing body of UCC. He will receive a Degree of Doctor of Laws.

Judge Donald Molloy has been a leading reformer in judicial practice in Montana and has adjudicated on significant environmental rights cases involving cleanup of polluted sites and hunting practices.

Judge Molloy has a strong personal interest in his Irish heritage and in the early 2000s studied the Irish language for a semester under the guidance of Corkman Traolach O’Riordain, who heads the Irish Studies programme at the University of Montana.

Both Judge Molloy and his wife are natives of Butte, Montana, a place closely tied to many Irish families. Judge Molloy will receive a Degree of Doctor of Laws.

The degrees will be conferred on June 7th.