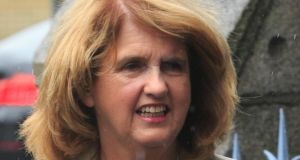 Tánaiste Joan Burton has said youth unemployment is a “very important issue” and that the Government was working hard to provide young people with positive options.

She was commenting after an OECD report found that the percentage of Irish 15-29 year-olds who are not in education, employment or training was 21 per cent, which was far higher than the EU21 and OECD average of 15 per cent.

Speaking at the opening of the new DIT campus at Grangegorman in Dublin this morning, Ms Burton said the Government was working hard to ensure young people who are out of work are provided “with really positive options in relation to education, training and work experience, and indeed employment”.

“We inherited a model whereby to become an apprentice or a trainee you had to have an employer sponsor you,” she said, but with business closures during the downturn, especially in construction, “those opportunities really dried up”.

“Now we have to recreate that model,” she said.

Minister for Education Jan O’Sullivan said a new apprenticeship council, due to be established “in the very near future”, will “broaden opportunities for apprenticeship to other sectors of the economy”.

“Traditionally it has been very much the construction sector and we need to do more work there as well,” she added.

Sheila Nunan general secretary of the primary teachers unions the INTO said education ministers were keen to point to successful models of education in Finland and other Nordic countries but an increased government investment was needed to match their examples.

She highlighted that Irish class sizes remain the second highest in the EU at 24 pupils per class compared to an EU 21 average of 20 per class. Only in England are classes at primary level bigger than in Ireland.

It was “unacceptable” that third-level funding was double that of primary school pupils, she added, calling for greater equalisation of funding between the different levels of education.

Secondary teachers union ASTI said the report showed schools were performing well, with 93 per cent of young people due to graduate from upper secondary education in their lifetimes well above the OECD average of 84 per cent.

The union’s general secretary Pat King said: “In Ireland, students who are educationally disadvantaged are more likely to complete school and progress to third level than those in other OECD countries.” But fresh investment was needed after the “savage cutbacks” of recent years.

On the pay findings, the TUI noted that as well as working longer hours than the OECD average teachers earned less than those with similar qualifications and experience in other sectors in Ireland.

Its president John MacGabhann pointed out that the number of teaching hours a year for Irish second level teachers was 735, which was “far in excess” of the OECD average of 675.

“Today’s report also highlights that teachers in Ireland earn just 81 per cent of the salary of workers with similar education levels in Ireland, compared to an OECD average at upper secondary of 92 per cent.

Even then, it must be borne in mind that this is based on those lucky enough to have full hours, and we would estimate that up to half of teachers under 35 are on contracts of less than full hours. In actual fact, many Irish teachers on part time hours do not earn a living wage.”

Overall, the report says Ireland has a “promising outlook” with 93 per cent of young people due to graduate from upper secondary education in their lifetimes.