Government to talk with teachers over new entrants’ pay 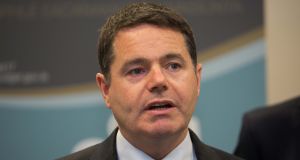 Minister for Public Expenditure and Reform, Paschal Donohoe told the Dáil that his officials met with the Teachers’ Union of Ireland (TUI) and the Irish National Teachers Organisation (INTO) on Tuesday to discuss a basis for talks. File photograph: Gareth Chaney Collins

The Government is to begin talks with teachers’ unions that have signed up to the Lansdowne Road Agreement over issues such as pay levels for new entrants.

Minister for Public Expenditure Paschal Donohoe told the Dáil that his officials met with the Teachers’ Union of Ireland (TUI) and the Irish National Teachers Organisation (INTO) on Tuesday to discuss a basis for talks.

However, he warned that pay restoration will not be applied for workers who have not signed up to the agreement such as those with the ASTI.

Both the TUI and INTO say they made strong representations to Government officials during Tuesday’s meeting over pay arrangements for newly qualified teachers.

They said they also cited the recent agreement to restore allowances to firefighters, which many observers see as offering a chance to claw back allowances which were cut during the downturn.

In a statement, the INTO said it was agreed that management would commit to a series of meetings and engagements with the INTO and the TUI to fully scope out the issues involved regarding pay arrangements for newly qualified teachers.

These meetings are due to commence this month.

The ASTI, meanwhile, is planning to hold talks with Minister for Education Richard Bruton after accepting his invitation to discuss a number of issues which it is in dispute with.

The country’s biggest secondary teachers’ union is facing conflict with the Government on a number of fronts, including junior cycle reform, the withdrawal of Croke Park hours and pay rates for new entrants.

Its recent decision to withdraw Croke Park hours has triggered financial penalties which will see ASTI teachers’ risk losing out on incremental pay increase and pay for supervision and substitution.

Mr Donohoe told the Dáil that any move to immediately repeal cost-cutting measures implemented over recent years for all public servants would cost the State about €2.2 billion.

“I cannot reconcile that figure with the need to fund all of the other public services that this House wants me to deliver,” he said.