No Irish college makes the top 100 for maths, computers or engineering in subject poll 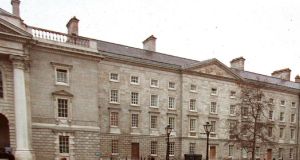 
Irish universities are performing at a much higher level internationally in arts and humanities than in science and technology, according to the latest in a series of rankings for the sector published today.

Trinity College Dublin (TCD) remains the country’s best-performing institution, making the top 200 in 20 of the 30 disciplines examined in the QS World University Rankings by Subject .

However, QS head of research Ben Sowter, said: “The list of subjects in which Ireland does not have a single university in the top 100 includes mathematics, physics, computer sciences, and all four of the engineering disciplines.”

While the Government set up a review group to promote science, technology, engineering and mathematics (Stem) education, Mr Sowter said: “Increased international competition from Asia is making it difficult for Ireland’s universities to keep pace, especially in the Stem disciplines.”

Of the six other Irish universities, UCD stood out, with rankings in the 51-100 bracket for a number of subjects, including modern languages, agriculture, accounting and law. All of the remaining five made the top 200 in at least one of the 30 disciplines.

University College Cork (UCC) welcomed the fact that it had improved its general position in the rankings, moving up into the top-150 bracket for environmental sciences and the top 200 for education.

Prof John O’Halloran, head of the school of biological, earth and environmental sciences, said it was “a welcome vote of confidence in UCC’s student-led, research informed and practice focused approach”.

DCU welcomed the fact that it had been ranked in the top 151-200 category for computer science and information systems, politics and international studies.

Citing a particularly strong score for employer reputation and research citations, DCU president Professor Brian MacCraith – who chairs the Stem review group – said the latest survey reflected “our commitment to transform the lives of our students by equipping them with the full range of skills to flourish in 21st century society”.

The QS survey, part of a burgeoning field of performance measurements for the sector, ranks 689 institutions on a subject-by-subject basis from a long-list of almost 3,000 colleges. Its authors say judging higher education by this method indicates “traditional big-hitters such as the Ivy League and Oxbridge may no longer be dominating global academia”.