Up to 40,000 students to lose 10% in English exam if they cannot take part in assessments 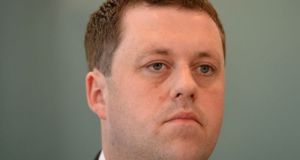 Fianna Fáil is calling on the Government to insist that thousands of junior cycle students will not lose 10 per cent in their English exams next summer due to a union dispute.

The new junior cycle, which replaces the Junior Cert, is being rolled out across all secondary schools and seeks to provide a much broader assessment of students’ achievements.

However, the biggest secondary teachers’ union, the ASTI, has directed members not to take part in any classroom-based assessments linked to the changes. This means up to 40,000 students are set to lose out in the exam.

In a new intervention, Fianna Fáil’s education spokesman Thomas Byrne will on Tuesday announce details of a motion calling on the Minister for Education Richard Bruton to immediately withdraw from the negotiating table the “threat of punishment of students”.

“We are aware that talks are ongoing, but we think that the threat of 10 per cent deduction of marks of students in certain schools is unprecedented in industrial relations.

“It is causing stress to students, when they are already stressed enough. An imaginative solution to this for this year’s exam is needed, but there are examples which can be used by the State Examinations Commission and the National Council for Curriculum and Assessment to finalise the position.”

He added: “ No child should be punished nor their exam marks put on a negotiating table.”

The fact that the main Opposition party, which supports the minority Government, is laying responsibility for solving the controversy with the Minister rather the union, will be seen by many as a significant development.

At present, pupils in about two out of three secondary schools, or at least 40,000 students, will not be able to take part in classroom-based assessments due to the union’s directive to members.

A spokesman for Mr Bruton said his department has asked the ASTI to suspend their directive for current teachers of English to ensure students are “no longer unfairly and unjustifiably disadvantaged”.

He said the union’s earlier grounds for objection to the reforms have been addressed, and that his department was willing to discuss any clarifications and issues around implementation of changes.

The ASTI’s opposition to the junior cycle changes stems mainly from its belief that teachers should not have to mark their students’ work for State exams.

The union insists it is still within Mr Bruton’s gift to ensure students will not be deprived of 10 per cent of marks if they do not participate in classroom- based assessments in English.