ExamWatch voxpop: ‘I was writing up until the very end’

Leaving Certs in Maryfield College, Drumcondra give their reaction to the first exam 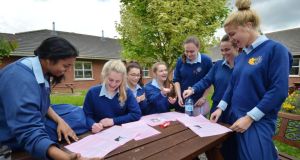 “It gives us a start. It was a bit anti-climatic really, it just feels like a normal exam. I’m just glad that it’s started.”

Lizzie Thompson (17) echoed the sentiments of thousands of Leaving Cert students as she emerged from her exam hall yesterday after the first exam.

It was a purely academic affair in Maryfield College, Drumcondra, Dublin, as 122 Leaving Cert students filed out into the broken June sunshine. But there was a sense of relief felt by many students.

The general consensus was that the first exam, English Paper 1, was challenging, but a fair test. A soft landing for many after parachuting into what seem to be the toughest 10 days of their lives.

Vadhusha Horil Roy (17) felt that they were not given a lot of choice but overall it went well.

“I thought it went really well. Questions A and B were more challenging than previous years. The questions were all similar, and I didn’t see a lot of choice being given to us,” she said.

“I spent a bit too long on question A, which left me a bit stuck for time with the essay, but I got it done in the end.

“The essays had similar themes, but there was a good few different angles that we could go on.”

Classmates Jennie Dunne (18) and Clodagh Reid (17) agreed with her. Time was of the the essence for the pair as they, like thousands of others, were pushed to write for the full 170 minutes.

“I thought it was okay, and I got it all finished in time. I got five minutes to look over it in the end, which was great,” said Lizzie Thompson, who was glad she was lucky enough to read over her answers.

The current cohort of students are expected to reach great heights once they graduate, according to school principal Maree O’Rourke.

“They’re a really bright and academic bunch. It was no bother to them at all, and I think they’re all capable of getting the results they want,” said Ms O’Rourke.