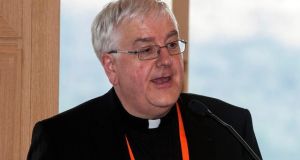 Fr Paul Connell, president of JMB/AMCSS: “I would appeal to all concerned to pull back and work in a spirit of dialogue to resolve these issues for the good of all our school communities.” Photograph: Sally MacMonagle

Hundreds of secondary schools will close and teachers face losing thousands of euro in pay if the biggest teachers’ union votes to cease working agreed hours, the secretary general of the Department of Education has warned.

The Association of Secondary Teachers Ireland (ASTI) is due to ballot members next month on a proposal to withdraw an additional 33 non- teaching hours agreed under the public sector pay deal.

In a strongly worded address to the annual conference of school managers in Killarney yesterday, Seán Ó Foghlú said any move to cease working these hours would be an “effective repudiation” of the Lansdowne Road agreement.

He also said it was “extraordinary” the union’s central executive committee had opted not to put full information on all the possible implications of such a vote before its members. He acknowledged, however, that a recent union newsletter outlined some implications.

In the meantime, the department will make information available on the consequences for ASTI members. In contrast to the Teachers’ Union of Ireland (TUI), he said the ASTI had opted to ballot without entering into talks with the department to explore other choices.

He was speaking at the annual conference of the Joint Managerial Body, which represents the boards of management of two-thirds of secondary schools.

He said: “I would appeal to all concerned to pull back and work in a spirit of dialogue to resolve these issues for the good of all our school communities. We stand ready to assist in any way we can.”

Potential losses associated with teachers withdrawing the hours include the loss of supervision and substitution payments due in September, the extension of increment freezes and loss of improved contracts for non-permanent teachers.

He also expressed disappointment that an invitation to ASTI to join in the discussions had not yet been accepted.

“That is regrettable. They have opted to move directly to ballot without seeking to explore the full potential of the choices that they face. The invitation to talk remains open.”

He said the two other main teacher unions, the Teachers’ Union of Ireland and the Irish National Teachers’ Organisation, have raised the issue of achieving more productive use of these hours. “The department is open to considering this question with the relevant partners. We would be very glad to have ASTI at the table for those discussions,” said Mr Ó Foghlú.

On junior cycle reform, he said the ASTI’s position of “continuing resistance” to progress was no longer justifiable. He said it was disappointing the union did not engage with its members to explain the changes when they voted on the reforms.

The secretary general said the ASTI’s refusal to co-operate with the reforms was a cause of frustration and concern. “It is unfairly preventing ASTI teachers from accessing the professional training they need in delivering the new programme to current first- and second-year English students,” he said.

“And most importantly, it is creating an unfair stress for these students, who now face uncertainty over their classroom-based assessments.”