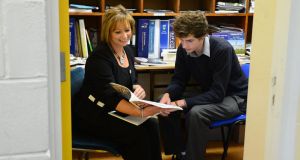 The removal of a dedicated guidance counselling service from secondary schools “has entrenched the privilege of those who are already privileged”, the professional body representing counsellors has said.

Commenting on the publication this week of a study into the impact of cuts in the service since budget 2012, the Institute of Guidance Counsellors (IGC) said it was now beyond doubt that the austerity measure was leading to great inequalities in the education system.

“The IGC believes that it is the role of Government to support all children to achieve their potential, through providing a universal entitlement to support services in areas such as guidance counselling,” said the organisation’s president Betty McLaughlin.

“The removal of the dedicated guidance service in 2012 has entrenched the privilege of those who are already privileged, and undermined the prospects of those from less advantaged backgrounds in achieving their potential.”

The institute said it was “deeply concerned” at the findings of the doctoral study by Dr Liam Harkin, a guidance counsellor in Co Donegal’s Carndonagh Community School.

He carried out a survey of post-primary schools showing 69 per cent of respondents in the Free-Education Scheme (FES) reported a decrease in guidance hours in 2012/13 compared to 44 per cent in the fee-charging sector.

Among the trends identified by respondents was that quieter, more vulnerable students were losing out; less serious cases were being ignored; and mental health concerns were not being addressed.

Calling for a reversal of the three-year-old austerity measure, Ms McLaughlin said: “The removal of a dedicated guidance counselling service in our schools has widened the divide between those students whose parents have the resources to ensure their children’s schools have a high quality guidance counselling service, and who therefore secure the majority of highly sought after third level places.

“For the rest of the school-going population, personal, educational and vocational support services through the work of their guidance counsellor has deteriorated seriously in the past three years.”

She added the research showed that one-to-one counselling had been neglected, and had become a reactionary crisis intervention service, as a result of a large reduction in counselling appointments.

Meanwhile, a Dublin community radio station has announced details of an educational series this week providing some added support to Junior and Leaving Certificate students of English.

Novels, Plays and Schooldays is a nine-part series produced by Nearfm (90.3 FM) with the support of the Broadcasting Authority of Ireland.

It starts on Thursday, May 21st at 10.30 am with a discussion of the Junior Cert curriculum novel Of Mice and Men with staff and students from inner-city school Larkin Community College.

Other programmes, also being streamed on nearfm.ie, feature dramatisations and narrations of key excerpts from texts.