Cost of college campus lodgings set to rise by up to €1,000 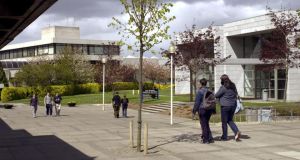 The cost of accommodation for one college year in one block of apartments on the UCD campus is to rise from €5,481 to €6,427 next semester. Photograph: Matt Kavanagh/The Irish Times

The cost of renting college campus accommodation in Ireland is to rise significantly from this September.

UCD confirmed it would increase the price of its accommodation again – following a rise of 13 per cent last year.

Rent for one college year (September to June) for accommodation at Belgrove, a block of apartments on the UCD campus, is to rise from €5,481 to €6,427 next semester (an increase of 17 per cent). The price includes a utilities payment of €465 and an “insurance payment” of €35.

Also in Belfield, the price of Merville accommodation is €6,427 for the year, up from €5,481 last year, while the price of Blackrock accommodation is €5,746, up from €4,091 last year (up more than 40 per cent). A spokesman for the college said the decision which allowed for this increase was taken by the finance committee of the university in 2013.

A spokeswoman for Trinity College said their rates would increase 3.5 per cent this September, following a rise of 4 per cent last year. The National College of Ireland, which also provides campus accommodation in Dublin’s city centre to students who attend all colleges, also confirmed a rent increase. A spokeswoman for the college said the cost of renting per semester would be €2,900, an increase of 6.2 per cent.

Mary Cunningham of the DCU accommodation office said the cost of renting accommodation in DCU on the north side of Dublin would rise 3 per cent from September.

The Department of Education said the Higher Education Authority was finalising a report on student accommodation and Minister Jan O’Sullivan expected to receive it in the coming weeks.