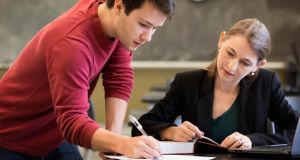 A Comptroller and Auditor General audit report has found teachers working at a Youthreach centre operated by Cork County Vocational Education Committee had been paid for more than 1,000 working hours for which they were not timetabled, at a cost of €60,000. File photograph: Getty Images

Payments totalling €114,000 were made to students ineligible to take part in courses at a Youthreach centre operated by Cork County Vocational Education Committee, a Comptroller and Auditor General audit report has said.

The report, published on Wednesday, said the VEC wrote to the eight students, who had attended Macroom Youthreach centre between 2007 and 2012, seeking a refund of the payments, but received no replies.

Subsequent legal advice said there was no prospect of a successful action to recover the money.

The report also said teachers working at the centre had been paid for more than 1,000 working hours for which they were not timetabled, at a cost of €60,000.

And payments were made to two members of staff there without PRSI or PAYE deductions.

The audit report of Cork County VEC also said the organisation had made a tax settlement with the Revenue Commissioners of more than €115,000 for failure to pay PAYE, PRSI, VAT and professional services withholding tax.

The settlement was made in 2013 and included tax due for special needs assistants and for referees of post-primary schools matches.

C&AG Séamus McCarthy carried out the audit report after the Oireachtas Committee of Public Accounts received a large number of complaints about County Cork VEC.

The VEC had an annual budget of just under €100 million a year and was responsible for facilities including 22 post-primary schools and community colleges and seven Youthreach centres.

It was dissolved in 2013, along with VECs throughout country, and its local work was taken over by the Cork Education and Training Board (CETB).

Between 2010 and 2013, more than €200,000 was paid in legal settlements related to employment issues, including compensation for non-provision of contracts, unfair selection for redundancy and failure to recognise qualifications.

The costs were significantly above the nationwide VEC average, the C&AG said, particularly in 2013, when solicitors and barristers were paid €156,200 - while the average countrywide was €30,000.

In February 2014, CETB paid a further settlement of almost €170,000 to a VEC employee brokered by the Equality Authority.

This included 11 years of salary arrears and €10,000 compensation.

Other issues of concern raised in the report included leases entered into without the required permission of the Minister for Education, scholarship costs associated with a lease at Schull and expenditure incurred for the storage of a sailing boat.