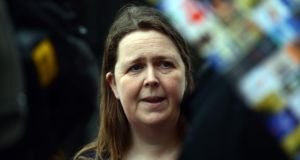 Labour TD Joanna Tuffy, who chairs the Joint Oireachtas Committee on Education and Social Protection, has called for a rethink of the “divestment” policy in education. Photograph: Cyril Byrne/The Irish Times.

Minister for Education Jan O’Sullivan is being urged to reverse plans to create “competing” school patrons at primary level amid claims that it is exacerbating ethnic segregation.

The plan to divest schools from Catholic patronage in order to boost parental choice was the main recommendation of the forum on patronage and pluralism set up by her predecessor Ruairí Quinn.

But Dr Dympna Devine, head of the UCD School of Education, said the policy is helping to “institutionalise segregation. That mightn’t be the intention but it is the outcome”.

She was commenting on data published by The Irish Times this week showing that 23 per cent of primary schools cater for four in five immigrant children. In 20 schools, more than two-thirds of pupils were recorded as being of a non-Irish background.

Dr Devine, who has studied the integration of immigrant children in education since the late 1990s, said “parental choice is fine but not everybody has the same resources, or the same local knowledge”.

She said there was an emerging phenomenon internationally of “bourgeois schools” impacting on educational policy. These were particularly evident in Wales, with Welsh language schools, and here with Gaelscoileanna, which had the lowest intake of both immigrant children and pupils with defined special educational needs.

“People are looking for something ‘added’ for their children’s education. If I send my child to ‘this’ school instead of ‘that’ I am exercising my parental choice but it’s based on my knowledge, expectations and sense of entitlement for my children,” she said.

“For immigrant parents, they are still figuring out the system. They tend to be clustered in a particular area with the lowest rental costs and they don’t have the same choice.”

Labour TD Joanna Tuffy, who chairs the Joint Oireachtas Committee on Education and Social Protection, also called for a rethink of the “divestment” policy.

“The idea of greater choice of patrons and divesting in order to facilitate that choice is the direct opposite of education being inclusive. We are essentially dividing children up and sending them to schools on various grounds that in practice are including religion, race, ethnicity, and socio-economic background,” she said.

“Also the idea is a nonsense in the context of town or village with one school. That school should obviously cater for all local children irrespective of religion.”

“I believe the objective should be over time to move to a state multi-denominational model bringing all stakeholders on board and in the meantime anything that can be done to make all schools more inclusive including via enrolment policy legislation should be done.”

Fianna Fáil Senator Averil Power, a committee member, said school patrons were generally very active in promoting inclusion, “the reason the Catholic Church wants to divest is because they want to make their remaining schools more Catholic, or as Catholic as possible.

“In a true republic, children of all ethnic, social and religious backgrounds would go to the same school.”