College rental rates to rise by up to 13% 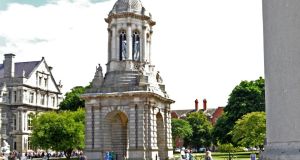 The cost of renting college campus accommodation in Dublin is set to rise by up to 13 per cent this September.

UCD, on the southside of the city, is increasing the price of its campus accommodation by almost 13 per cent. For example, yearly rent for accommodation at Belgrove, a block of apartments on campus, is set to rise from €4,470 to €5,050 while Roebuck Hall, another on-campus residence, is set to increase from €5,540 to €6,260. A spokesman for UCD said that their prices had remained “fairly static” in the past four years with yearly increases of 2 per cent each year since 2012.

The spokesman said that in setting the fee for the 2014/2015 academic year, “the university commissioned an estate agent to provide a report on the current private rental market within easy access of the campus to ensure that licence fees are not out of kilter with the private rental sector.”

Griffith College Dublin is meanwhile to increase the price of its campus accommodation by an average of 9 per cent.

A spokeswoman for Griffith Halls of Residence said the increase was necessary because of the rising costs of utilities and services. The accommodation is available to students studying in Dublin, regardless of their college.

“We have also found it necessary to increase our prices due to the Government’s withdrawal of previous tax incentives, which was the basis on which Griffith Halls of Residence was constructed. After undertaking research in the Irish market ... an average weekly increase of €12 is being applied,” said the spokeswoman.

Trinity College in the city centre said it expected accommodation rates on campus would increase “by about 4 per cent” this year.

“This rise should be considered in the context of an increase generally in private rental costs in Dublin which some experts have put at over 11 per cent in the past year,” a spokesman for Trinity said.

Meanwhile, student accommodation prices on the northside of the city will also increase.

The cost of living on campus in Dublin City University for the 2014/2015 academic year will rise for the first time since 2007 by 3 per cent.

On-campus prices for residences, including Hampstead and College Park, as well as postgraduate accommodation, will all increase by an average of 3 per cent, while the cost of living in Larkfield, another block, for incoming students will remain unchanged.

General manager of campus residences at DCU Mary Cunningham said that the increases were necessary to allow for refurbishment and that DCU remained good value for money and cheaper than its competitors.

“Further increases in the cost of campus accommodation and the lack of options in the private rental market will compound the problem,” he said.

Mr O’Connor said the rising cost of rent and cuts to student supports and grants would lead to more students suffering hardship. “There is a wider issue in that more students from outside Dublin are choosing to commute because of the cost of accommodation and living in Dublin, and their college work is likely to suffer as a result.”

“Projections over the next few years show that there will be an increase in the number of students entering higher education. The people who would have traditionally gotten mortgages are renting instead and squeezing students out,” he said.

Mr O’Connor said that Government intervention would be required to deal with the crisis. “Last year we had to speak to officials from the Department of Housing and it was also suggested that we may need to look at properties under Nama to help feed the demand.”