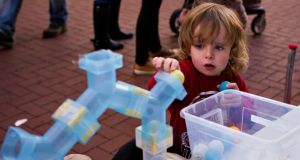 Alex Butler, (3) Templeogue, has fun playing with the maths puzzles at Maths in the City in Stephen’s Green on Saturday, an event marking the start of Maths Week 2014. Photograph: John T Ohle Photography

The largest festival for the promotion of maths worldwide kicked off in Dublin at the weekend with the opening of the all- Ireland Maths Week 2014.

The week – which oddly enough covers nine days until Sunday next – will see an expected 200,000 schoolchildren and many others take part in hundreds of events on both sides of the Border.

Organised by 50 institutions from universities to public libraries, the events will feature puzzles and games designed to highlight the “fun factor” of maths. Visitors will be challenged to test their brains with such teasers as: “My age is four times what it was four years ago minus twice what it will be in four years’ time. What’s my age?”

The organisers are hoping to change perceptions of maths, highlighting how important numeracy and maths are to society and the economy. Events are taking place from Letterkenny to Waterford and points between. See mathsweek.ie