Change One Thing: Apprenticeships need to be in the education mix 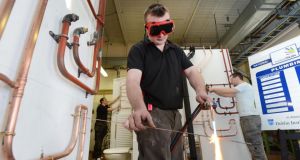 Hands on: why can’t we provide an appropriate curriculum for the 20 per cent of secondary-school students who would be more challenged by a practical programme of study? Photograph: Alan Betson

The one change to our existing educational system I would like to see is that we would value high-skills vocational training for the 20 per cent of students who are not particularly interested in, or suited to, a curriculum with an academic focus.

Industry could support such a radical change by providing a comprehensive apprenticeship structure for interested students from the age of 14. As part of the programme, students would continue to progress alongside their peers in core subjects such as English, maths and a European language.

Having provided for the needs of our practically minded students through an apprenticeship programme, we should maintain the current range of Junior Cert subjects for the 80 per cent who have no difficulty in studying them, thus preserving subjects such as history and geography as core to our curriculum.

Germany, Austria, Denmark and the Netherlands have a fraction of the youth unemployment when compared to Ireland and we need to ask why this is the case. The answer, I believe, lies in educational structures that value vocational education.

In the German system, 51 per cent of employers offer 570,000 apprenticeships annually, of which 90 per cent are of equivalent standard to an A-level in the UK.

The British government has announced the establishment of a radical new type of college which will offer vocational training to young people from 14 years old, giving them the skills to work in practical occupations, from chefs to construction workers, as well as in the digital economy. Alongside vocational training, the new-style colleges will also ensure pupils study English, maths and science at GCSE level.
Is it really wise, as currently proposed by Minister for Education and Skills Ruairí Quinn, to reduce the academic standing of the Junior Cert and endanger the future of subjects such as history and geography? Would it not be wiser to leave the 80 per cent of students who currently engage successfully with the existing range of subjects on offer at Junior Cert level to continue to do so, while providing an appropriate curriculum for the 20 per cent who would be more challenged by a more practical programme of study? Would some of the 20 per cent of Irish students who disengage from education be the sort of pupils who, in previous generations, would have attended our vocational schools?

I am not just suggesting we go back to the era of vocational school versus voluntary secondary school. This fell apart in many areas when parents got the chance to choose the voluntary sector following the introduction of “free education” by Donagh O’Malley in the late 1960s. A return to that way of thinking would be bound to fail.

An Irish model of the current German vocational system for 14-year-olds, and the new model recently proposed in the UK, would be dependent on a huge cultural change on the part of Irish society and employers towards the issue of vocational education and apprenticeships.

The investment by German employers in a teenage apprentice, over a four-year period, is reckoned to be in the region of €100,000. Could we envisage such a scenario in Ireland?

Are we as a society capable of moving our educational aspirations for our children away from a total fixation on college entry through the CAO process to a more balanced approach that would affirm and bestow high status on the huge range of practical skills that are generated by effective vocational education and apprenticeships, and on which our society depends?

We must make this change if we are to provide all our young people with career prospects, in tune with their innate aptitudes, skills and abilities.