Celebrate exam achievement, but remember those for whom the way is not so easy

Students from more difficult backgrounds can benefit from help and monitoring 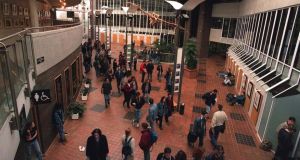 University life is meant to be enjoyable as well as serious, but many students may find difficulty adjusting to, or benefiting fully from, the cultural and intellectual extra-curricular activities considered a normal part of third level education.

As the 2013 Leaving Cert results are announced today we can anticipate the usual euphoria over students who have scored 600 points.

It is important to celebrate such great achievements. But we might also consider those youngsters awaiting results who have encountered many difficulties along the way to sitting their Leaving Cert, having come from backgrounds where no one has gone to university before, yet who hope to advance to third level against the odds.

If a society can be said to work then all parts of it have to function and we should devote some attention to those who have the capacity to do well, but are starting from a position of disadvantage and may need extra support along the way to achieve their full potential.

Society will reap the benefits of this early support.

The Higher Education Access Route (Hear) is a university admissions scheme offering places on reduced points and extra college support to students from deprived backgrounds. Its figures for 2013 show that the number of students entering via Hear has risen by 71 per cent since 2010. The development of access programmes under this initiative shows that there is a will within universities to open their doors to non-traditional students.

Initial barriers
However, widening access is about more than opening the gates; for many students getting into college is only the start of the journey.

Initial barriers to university success can be financial, family- and health-related, cultural and geographic – or a combination of any of these.

Many students may find difficulty adjusting to, or benefiting fully from, the cultural and intellectual extra-curricular activities considered a normal part of university education. Debating with peers is beneficial at college, but those who grew up in a home where calm discussion around the dinner table was not the norm or who did not benefit from trips abroad or visits to museums can find themselves at a disadvantage, even out of their depth. For many, it is not that they lack the ability to engage; it is that they lack the confidence.

The effects of this are demonstrated by strong social class differentiation in statistics for completion of undergraduate studies. The HEA report, A Study of Progression in Irish Higher Education, noted a high variation in progression across socioeconomic groups. Groups with the highest entry rates tend to display the highest rates of progression, while the lowest rates of progression are found among lower socioeconomic groups – the traditional working classes.

Future Voices Ireland was set up by legal professionals to work with and mentor talented teenagers, from some of the most difficult and disadvantaged backgrounds, to encourage them into third-level education and to enable them find their voices. Our experience working with these young people has taught us that despite their intelligence and ability they start off with absolutely no self-belief.

Changing this has emerged as the key to progress.

By working with these young people every weekend in a six- month programme, the teenagers have had the opportunity to explore and debate a range of human rights topics with leading Irish political and legal figures. These include Supreme Court Justice Frank Clarke and former governor of Mountjoy John Lonergan, among others.

Having observed our teenagers over many months, a dramatic change has occurred. They now believe it is possible to achieve whatever they put their minds to.

For such young people, who often come from estates where drugs, gangs and murders are commonplace, they may have never believed such opportunities were possible, as they have never known anyone who has completed secondary school and gone on to third level.

This is why mentoring can be so important for young people growing up without strong role models. Mentors can help with making connections and creating opportunities and, importantly, building confidence. Young people from deprived backgrounds have a double disadvantage as they don’t know many influential people. And second, they also may be too intimidated to relate to such figures that might be willing to help them.

We all have a social and moral duty to reach out to those around us. We must mentor those trying to change their lives, encourage them and treat them fairly; particularly those of us who have experienced the same struggles ourselves. If we don’t, as a society we are missing out on the huge potential that these young people have to offer.

Mairead Healy is director of Future Voices Ireland, a youth empowerment and human rights education charity based in Dublin that works with disadvantaged teenagers