A wealth of job opportunities . . . and not just in the sciences 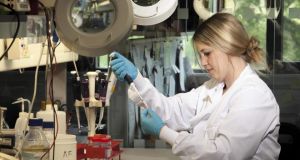 NUI Galway student Janna Luessing. Employers value science graduates because of their ability to research and analyse information, to spot patterns and trends, and present their findings in a disciplined manner

As conspiracy theorists and fantasists would have it, climate change is a myth, evolution is a con, and vaccines will harm your children. They are wrong. In reality, without science you’d be living in a cave, picking beetles off the wall, and shivering in fear for your life. There’s no going back.

Science students are trained to think in an analytical, logical and structured way. They focus on facts over speculation. Employers value science graduates because of their ability to research and analyse information, to spot patterns and trends, and present their findings in a disciplined manner. Being able to think scientifically is also a useful skill for day-to-day life, while well-trained science graduates are crucial for making informed decisions about major public issues including climate change, food policy, and enterprise.

The natural sciences – what we usually think of as physics, chemistry, and biology – are a very broad church, and students can take many different paths. Geology, for instance, is nothing as snoozeworthy as the study of rocks: it is a way of discovering the history of the earth and its many cycles of life and extinction. Genetics gives us an insight into the most complex code ever written, the human genome. Pharmacology, which develops crucial medicines, is now nothing less than what keeps us alive. Then there’s microbiology, zoology, astronomy, theoretical physics, neurobiology and so much more.

But you don’t need to worry about that just yet. Increasingly, third-level institutions are moving towards general entry, with students choosing science specialities after a year of studying several subjects.

Where to study science

If you’re broadly interested in science but have no idea whether you want to study the human brain (neurobiology) the ocean (oceanography) or the universe (astrophysics), it makes sense to choose a common entry course: students take three or four subjects for the first two years, before choosing among 16 specialities for their final two years.

UCD and the Dublin Institute of Technology offer general entry courses, with an emphasis on physics, chemistry, biology and maths in the first year, before students go on to specialise. If you’re a bit more certain, UCC has retained its direct entry system, with courses including chemical sciences, physics and astrophysics, and genetics, among other options; DCU offers both common entry and specialised entry science courses.

Science is, of course, exceptionally broad and despite the tentative move towards general entry, there are a huge number of more specialised interest courses, many geared towards employment prospects.

Some of the more interesting scientific courses are the most revolutionary in terms of how we understand ourselves and the world.

Nanotechnology – the science of the very tiny – is still in its infancy, but it is also at the cutting edge of science and of increasing importance to how we live our lives, sparking massive advances in medicine, materials, and technology. Nanotechnology deals with atomic scales, as small as one-billionth of a metre. Trinity College is leading the way here, offering a nanoscience, physics and chemistry of advanced materials degree. DIT has a science with nanotechnology course which includes an industrial work placement.

Genetics is nothing less than the code of life, providing an insight into how human beings work. Courses are available at Trinity, UCC and DCU, with graduates going on to work in public and private labs, research and development, hospitals and medical diagnostics, clinical science and genetic counselling.

by the Higher Education Authority showed 63 per cent of science postgraduates were employed in Ireland and abroad, with 10 per cent in further studies or training and 11 per cent out of work.

Science students who want to advance their career and earn decent money will need to give serious thought to postgraduate study.

Industry is an obvious destination for science graduates, with a strong biomedical cluster in Galway, a pharmaceutical industry with job opportunities in Cork and Dublin, the food and drink industry, and high-tech manufacturing. Opportunities in academia are increasingly limited, but commercial research and development is growing. Regulation compliance and quality assurance, laboratory work and clinical trials, and science teaching are some other routes for science students. Environmental scientists have good employment opportunities in both the public and private sectors.

Science degrees, however, are broadly useful and appreciated in any career that requires rigorous and logical thinking, such as banking and finance, statistics, telecoms and computing, and business.