A scholarship scheme is bringing 1,200 students from Brazil to Ireland. It’s the first step in a two-way exchange plan to develop the Science Without Borders programme 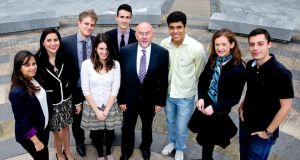 Ireland’s universities and institutes of technology are about to get a huge burst of Brazilian culture, with more than 1,000 science and engineering students hitting campuses this autumn and a further 3,000 expected over the next four years.

It has been a good year for Hiberno-Brazilian relations: the number of Brazilian students studying here has jumped from 120 to 1,200 in just 12 months as Ireland has been earmarked as a key partner in the South American government’s ambitious Science Without Borders scheme.

“The Brazilian government has established a national scholarship support service on an unprecedented scale,” says Marina Donohoe of Enterprise Ireland. “It is funding the tuition and living costs of 101,000 Brazilian students over the next four years. These students are set to travel to universities all over the globe, but a significant proportion will be coming to study here.”

The arrangement will be a fillip for Irish universities and institutes of technology. This year the scholarships are worth €30 million to higher education here. Over the life of the programme that figure will reach €110 million.

“The ambition is for Brazilian students to become more internationalised and globally focused,” Donoghue says. “Enterprise Ireland, along with Irish higher-education providers and other stakeholders, have successfully marketed Irish science, engineering and digital-media programmes to the Brazilian government. The hope is to build a two-way exchange and encourage our universities and IoTs to develop relationships and send students to their sister universities in Brazil.”

From the point of view of economic strategy, the scholarship programme couldn’t have come at a better time. The developing economies of Brazil, Russia, India and China are key targets for Irish exports. But for the 1,200 undergraduate and postgraduate students studying at 23 higher-education institutionshere, there are more pressing issues than Ireland’s export future.

Mateus Ramalho from the city of Belo Horizonte studies control and automation engineering. He hopes to work for a large company and, eventually, start his own company. He chose to come to Ireland with the Science Without Borders programme because he felt Irish people would be kind and welcoming.

“I am having a great time in Ireland and enjoying every little detail in Dublin. It is a big city but seems like you are already at home. The friendly people and the welcoming atmosphere make the settling-down process much easier. Making new friends from all over the world is easy because of the large number of international students. There are also a lot of Brazilian students in my university, and we are friends already. I am studying at University College Dublin, and the experience has been unique so far. Unlike Brazil, we have a huge involvement with university life. The staff are understanding with international students, and they really worry about our needs.”

Anderson Augusto Simiscuka, a 21-year-old from Osasco, a city that is part of Greater São Paulo, was going into the final year of a BSc in information systems at the Universidade Presbiteriana Mackenzie, one of the most prestigious private universities Brazil.

“I’m studying a BSc in business information systems at the National College of Ireland. I chose it because the subjects offered are related to what I was already studying in Brazil and will complement my studies,” he says. “When I was in the first semester of my course in Brazil I got an internship, so I worked from 10am to 5pm, and classes are from 6.30pm to 11pm, Monday to Friday. It is common in Brazil to work and study at the same time. After a year I became a regular employee as a technical training analyst. My company had partners such as Cisco, Nice Systems, Verint and Convergys. When I go back to Brazil I hope to continue in the business-analysis area.

“When I applied to the programme the available countries were Belgium, Finland, Austria, China and Ireland. I wanted an English-speaking country, and Ireland, especially Dublin, is a huge information-technology centre, so it was the best option for me. It is a great country, with beautiful places to visit and interesting culture. Dublin is a mix with people from many countries, and lots of Brazilian people, and I can see some similarities to a big city like São Paulo, such as traffic, many parties and shopping centres.”

Marilia dos Santos Gildo, who is 28, is studying information technology at Dublin Business School. “I have a degree in English-language teaching, and I work for Banco do Brasil, a Brazilian federal bank. My intention, once I get back, is to migrate to the IT area of the bank, aiming for project management. I’m also considering applying to global companies in order to use the learning experience I have in Ireland.

“I have always been fascinated by Irish culture and history. Besides sharing with the Irish a passion for music, there are many leading global companies in Ireland with internship opportunities, such as Google and Facebook. Also, Ireland is part of the EU, which facilitates access to other countries for travelling. Even the weather here is not that bad. I like rainy days.”

Camila Faccini de Lima, who is studying physics at the Federal University of Rio Grande do Sul, will spend her Irish year as a visiting student at Trinity College Dublin.

“I wanted to study at Trinity, and I was very happy when I was accepted. This year will be very challenging not only because of the language but also due to cultural differences. The college structure and the way lectures are given is very different from what I am used to, so adapting to a new system will take some time and effort.

“Life in Ireland seems good so far. I was able to meet some people in my classes, and I understand friendships take time to grow. People overall seem very friendly. Culture shock was not a problem, and the weather was great in the past few weeks, considering what I was expecting from Ireland.”

“They’re a really lovely bunch, and they have been selected for this programme because of their high academic achievements at home. They are already bringing great richness to the universities and IoTs where they are studying.”