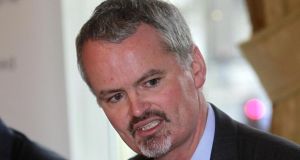 Mark Redmond of the American Chamber of Commerce Ireland called for reform: “You don’t want static content presented in a static way and then regurgitated in exams.” Photograph: Brenda Fitzsimons/The Irish Times

Leaving Cert examiners have expressed concern at school leavers’ ability to get to grips with spelling, grammar and punctuation.

A report published today by the State Examinations Commission says “greater attention should be paid” when teaching English to the basics of language structure, paragraphing and syntax.

While there was the usual fluctuation in standards in last year’s higher and ordinary exams, “examiners at both levels voiced a degree of concern with the level of control of the more formal aspects of language displayed by some candidates”.

The report said: “Adopting a process approach to writing, whereby students learn to research, plan, draft, re-draft and edit their writing . . . would be of significant benefit to all students of Leaving Certificate English.”

It also questioned standards of critical thinking, citing an issue with some students at ordinary level who “did not appear to appreciate that writing a review requires more than providing a summary of the relevant text (or programme or event) and an expression of the reviewer’s verdict in terms of ‘stars’ awarded or marks out of ten”.

English was one of six subjects from last year’s Leaving Cert reviewed by the commission’s chief examiner, with reports on three of the other subjects published today. These included chemistry, where examiners identified a similar problem with candidates answering “in the form of a phrase or a word” rather than properly formed sentences.

The report comes amid fresh criticism of the education system by the American Chamber of Commerce Ireland. At an industry event in Dublin yesterday, its chief executive Mark Redmond said reform was necessary and that a “key element” of this was the planned change to the Junior Cycle – a proposal strongly opposed by teachers’ unions. “We must have an education culture that embraces the inevitability of change,” he said.

He said a new focus on digital media literacy and getting Leaving Cert students to work in groups rather than “sitting in rows facing the teacher” were among the measures needed to better prepare students for the future.