‘This is the first generation where creativity has dropped significantly,’ conference told 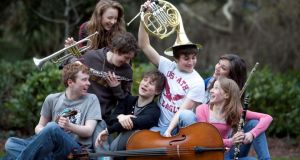 New technology can limit creative thinking in young people, but artistic pursuits like learning an instrument can counter the negative effects, a conference in Dublin has heard. Photograph: Jason Clarke Photography

Engagement in the arts can act as a “counterweight” to the negative effects of new technology on risk-taking and creative thinking, a higher education conference in Dublin heard today.

Cognitive scientist Pireeni Sundaralingam said research in the US showed that “digital natives” - the type of young people going through universities today - “don’t take the same risks because they live in a controlled environment where making mistakes can leave a permanent record”.

Harvard educationalist Prof Howard Gardner had identified a “significant reduction in risk taking” in what he called this “app generation”, Ms Sundaralingam noted. A further study by JPL Aerospace showed that, among new hires, “there is less ability to problem solve if something goes wrong”.

The company found that while graduates “spend more hours studying mathematics, computers and engineering, they spend less hours taking apart their grandfather’s watch and making mistakes, and having to solve ‘on the go’.”

Here, she said, the arts could play an important counterbalancing role in education as it was a “space where risk-taking can occur. Learning the violin, you’ll make mistakes; doing drama, you’ll forget your lines”.

Ms Sundaralingam, an associate professor at the California Institute of Integral Studies, was the keynote speaker at the conference hosted by the Departments of Arts and Education and supported by the Higher Education Authority (HEA).

She said it was difficult to keep track of the impact of the digital environment on the brain because of rapid progress in technology but studies had shown “this is the first generation where creativity has dropped significantly”.

Engaging in the arts could help to challenge this and could also be seen as a “cognitive workout” in its own right. “Artistic training is central to part of the process we describe as innovation.”

She cited a study at Michigan State University showing that students who had been engaged in an artistic practice in childhood were eight times more likely to produce a patent or launch a business in adulthood.

Endorsing this view, HEA chief executive Tom Boland said there was a symbiotic relationship between science and the arts. While Ireland placed a strong emphasis on improving its performance in STEM subjects (Science, Technology, Engineering and Maths), this was “not mutually exclusive to a continued commitment to the arts and the humanities”.

Under the National Strategy for Higher Education, universities, institutes and colleges were being encouraged “to ensure that first year students have a broad experience on entering third-level. A student in the sciences should gain exposure to the arts and vice versa”.