Dunlop ‘not embittered’ at losing out on IR£300m land sale 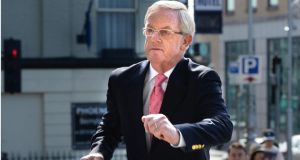 Former lobbyist Frank Dunlop has denied being “very embittered” at losing out on a IR£300 million land sale because of his failure to get lands rezoned at Baldoyle Racecourse in 1993.

However he said the decision by Dublin County Council in March 1993 not to rezone the land at Baldoyle as industrial was “spectacularly wrong”. Mr Dunlop said he had not been daunted by the negative vote and that he said at the time: “I’ve balls of iron and a spine of steel, and if I can’t make it here, I’ll make it somewhere else.”

He also admitted to bribing six Dublin County Councillors prior to the vote. Mr Dunlop was being cross-examined at Dublin Circuit Criminal Court about his claims of corruption against businessman Jim Kennedy and four councillors.

The court heard that Frank Dunlop’s company Pennine Holdings had an option on the site at Baldoyle, but that it was landlocked by 100 acres of land in which Jim Kennedy had a 50 percent interest.

Mr Dunlop agreed that Mr Kennedy’s land contained “the key to the kingdom” to making his site more lucrative, as it would provide essential access and services. “In the inimitable words of the late Liam Lawlor, ‘If there’s not a shit pipe under the land, it’s worthless,” said Mr Dunlop.

But Mr Dunlop told Michael O’Higgins SC, representing Mr Kennedy, that he doesn’t remember when he became aware that an important part of the land was owned by Jim Kennedy.

And he insisted that he never had any discussion with Mr Kennedy in relation to his land, nor did he make frequent requests to Mr Kennedy to consider selling access and/or services, so that the larger site could be developed to its full potential.

Mr Dunlop said that after his “spectacularly unsuccessful” attempts to have the land at Baldoyle rezoned in 1991, he sold his option on the land to Sean Mulryan of Ballymore Homes in April 1994.

When Mr Dunlop was reminded that he told the planning tribunal that he had been paid £1.2 million for the option by Sean Mulryan, he said he had no recollection of getting that amount.

“If you were to offer me a million euro I couldn’t tell you how much I actually got from him, or what I did with it,” said Mr Dunlop. The court heart that Mr Mulryan eventually brought the adjoining land from Mr Kennedy for IR£10 million, got the whole site rezoned in 1998, and subsequently sold it in portions for up to IR£300 million.

Mr O’Higgins asked Mr Dunlop how he could remember allegedly getting IR£25,000 in cash from Mr Kennedy in 1991 and not remember getting IR£1.2 million from Mr Mulryan.

Mr Dunlop replied that he had an “eidetic” or a photographic memory of some memories but not of others, adding that he could remember clearly collecting the money in cash from Mr Kennedy’s premises.

Mr Dunlop denied that he had been embittered or that he had “missed the boat” because his efforts to earn huge sums for the land had failed and the lion’s share of the profits had gone to Mr Mulryan, who benefited from the rezoning and from an explosion in the market value of land.

He said he was “no enemy” of Mr Kennedy and had “no axe” to grind against him, although he accepted that his sale on the option to Mr Mulryan had “made nothing like what could have been made had Dublin County Council voted in favour of rezoning.”

“In the context of unmitigated greed, a million quid was a bad result,” said Mr O’Higgins.

James Kennedy (66) of Cormorant Way, Queens Quay, Gibraltar is charged with making corrupt payments to councillors through Mr Dunlop to secure their votes in favour of rezoning land at Carrickmines in Dublin as industrial.

The corruption trial continues before Judge Mary Ellen Ring and a jury of seven women and four men. It’s due to last until the end of July.