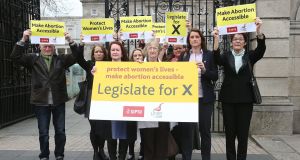 Protestors from various trade unions in Dublin calling on Government to legislate for the X case. Photograph: Julien Behal/PA Wire

An increasing number of women are attempting “amateur abortions” at home, it has emerged.

One Dublin clinic saw three such women in the first three months of this year. Medical director of the Irish Family Planning Association, Dr Caitríona Henichion, was speaking at a briefing on the the association’s concerns about some aspects of the proposed Protection of Life during Pregnancy Bill.

Dr Henichion, speaking after the formal briefing, was asked whether the the association was seeing women who had attempted abortions at home.

“Yes, we have certainly seen women who have taken on-line medications at home,” she said. “This year alone we have had three cases of women who have not been successful in their attempted terminations”

She said the three women presented at just one Dublin clinic, in the first three months of this year. “There certainly seems to be an increase in this and it seems highly likely it’s down to financial reasons.

“ In one case one chose to travel (to England) to have a full termination. In two of the cases there had been incomplete terminations and they were referred to services her for further treatment .” Dr Henichion said it was difficult to know whether they had taken the medication incorrectly, whether they had taken it at the wrong gestation, or, whether the medication they had been told they were being sent was not in fact what they received in the post.

So called “abortion kits” can be purchased on-line, containing the drugs Mifepristone and Misoprostol. It is illegal both to import these without a license and also to take them unless directed by a doctor.

It was particularly dangerous, said Dr Henichion, to take these without medical supervision, as the woman may bleed and have contraction and so believe the abortion has taken place, when in fact it may not have. “Bleeding, infection and failure of the procedure are the main risks.”

She said there had been a further case where a woman contacted the IFPA having bought the medication online but it had arrived without instructions, and she was seeking help as to how to take it. Dr Henichion stressed she was not given directions. “We didn’t know what she had been sent anyway,” she said. She did not know how much the ’kits’ cost. “But it’s still going to be a lot cheaper than €400 plus two flights.”

Legal adviser to the IFPA, Catherine Forde, said the new Bill as worded would maintain the “chilling effect of sanctions on women and doctors” who might consider abortion.

She said women’s voices would remain absent from all decision making relating to whether they should have an abortion. Indeed the provision that doctors considering performing an abortion “shall” consult the woman’s GP, she said, could see this being done against the woman’s wishes and could amount to an invasion of her privacy

Hospitals in South and Southwest getting lion’s share of Covid vaccines 03:00
Bin the bags: Council to refuse sacks in latest waste war 02:27
Gardaí to train park rangers in effort to tackle wildlife crime 01:00
Ex-master of Coombe Hospital seeks inquiry over Covid vaccine row 01:00
Trump to lift Covid-19 travel restrictions on much of Europe 00:24