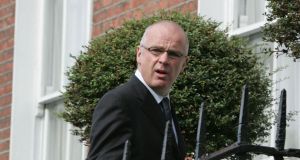 “I accept that the tone and language used in the tapes is inappropriate and I fully understand why the excerpts published have offended many people,” former Anglo Irish Bank chief executive David Drumm has told US-based journalist Niall O’Dowd in a piece on the publisher’s Irish Central website. Photograph: Alan Betson/The Irish Times

He said he fully understood why the published excerpts of taped conversations with other senior executives had offended some people, but claimed they suggested an incorrect interpretation of why the government issued a blanket bank guarantee in September 2008.

Mr Drumm was one of three Anglo chiefs recorded laughing about trying to source the money from Irish authorities.

“I accept that the tone and language used in the tapes is inappropriate and I fully understand why the excerpts published have offended many people,” he told US-based journalist Niall O’Dowd in a piece on the publisher’s Irish Central website.

He said the recording was made at a highly stressful and uncertain time and was an “embarrassing” and “shocking” reminder of the pressure they were under.

“However, there is no excuse for the terrible language or the frivolous tone, and I sincerely regret the offence it has caused. I cannot change this now but I can apologise to those who had to listen to it and who were understandably so offended by it.”

Anglo Irish was the first Irish bank to seek a government bailout.

It ran into trouble after lending tens of billions of euro to property developers before the collapse of the property market.

The government rescue package eventually cost Irish taxpayers about €30 billion and the bank was nationalised in 2009.

The banking crisis led to Ireland having to ask the International Monetary Fund and the European Union for an €85 billion bailout in 2010.

Leaked tape conversations between Anglo executives as the crisis gathered pace have been published all week.

They were recorded on the eve of the previous Irish government introducing the controversial €440 billion bank guarantee in September 2008.

In one discussion with a senior colleague, the troubled lender’s then chief executive Mr Drumm outlined his strategy for persuading the Irish Government to support a bank which was losing billions.

“Get into the f**king simple speak: ‘We need the moolah, you have it, so you’re going to give it to us and when would that be? We’ll start there’,” he said.

During a conversation with head of treasury John Bowe on December 15th 2008, Mr Drumm said he would “punch” former finance minister Brian Lenihan in a bid to secure funding for the distressed lender.

“I’ll probably punch him (Lenihan),” he said. “And I mean punch him, as if to say ‘what are you actually doing? What’s this about having to go through due diligence? You made that decision on the 29th of September. You’ve told the f**kin’ world we’re all solvent.’

“’Now can you protect your hundred billion guarantee of us by writing a two or three billion cheque and get on with it.’ So my goal tomorrow is to get that through to (Lenihan).”

This weekend he said he wanted to hear the similar dialogues that were going on at that intense time between the other banks and the Central Bank of Ireland and the Financial Regulator.

The executive claimed the selected excerpts from tapes begged more questions than they answered, promoting and suggesting an incorrect interpretation about how and why the government issued a blanket guarantee in September 2008.

3:33 'If this happens, there'll be all out war': Construction industry rumbled by wage legislation

Hearing into Ian Bailey’s proposed extradition to France opens at High Court 18:59
State staff will have to use unpaid time off to isolate if overseas 18:45
O’Brien demands action on ‘stone-age’ riding tactics 18:38
Coronavirus: Pubs to stay closed until August 10th amid new push on face masks 18:35
Business activity in Dublin fell at sharpest rate in almost 20 years 18:17