Divisive campaign in 1983 on abortion massive and intense 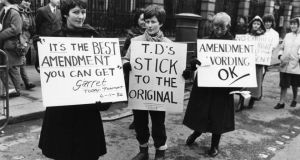 In 1983, the electorate voted in a referendum to approve article 40.3.3 in the Constitution which acknowledged the right to life of the unborn. It was carried by 67 per cent to 33. The amendment was unusual in that it had been proposed by the previous Fianna Fáil government. The wording was put to the people after the Fine Gael and Labour government’s alternative wording was defeated in the Dáil after both coalition parties allowed a free vote on it. In a subsequent Dáil vote on the original wording, which had been drafted by the Pro-Life Amendment Campaign, eight Fine Gael TDs and five Labour TDs supported it and, with the support of 73 FF TDs, it passed. The campaign in September was notable for the lack of participation by the two government parties, although Garret FitzGerald and Dick Spring called for a No vote. The Catholic Church and various anti-abortion groups, including Plac and the Society for the Protection of Unborn Children, mobilised tens of thousands of supporters to become involved in canvassing and in lobbying of TDs.

Enda Kenny, then a backbench TD in his early 30s, passed on the hundreds of letters he received in his constituency office to the Office of the Taoiseach, all but a handful urging a Yes vote.

Kenny says his decision to apply a strict whip on Fine Gael TDs for the abortion legislation now going through the Oireachtas arises out of his experience of the free vote in 1983 and what he regarded as the extraordinary pressure that was put on his colleagues by lobbyists and fanatics.

He has said he was determined that such an experience would not be repeated.

Remains of mothers and babies should be ‘returned’ to families 04:01
Government scrambles to fix vaccination and quarantine programmes 03:59
Dublin city centre mixed-use investment guiding at €950,000 02:30
Dublin warehouse portfolio sold at auction for €1.4m 02:30
The Irish Times Business Person of the Month: Steve Cutler 02:10