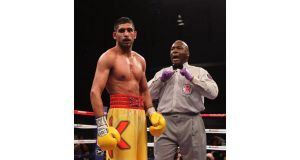 Boxing: Amir Khan blamed referee Joseph Cooper for his shock light-welterweight world title defeat to Lamont Peterson, insisting he was "against two people" in the ring.

The Bolton boxer lost a split-decision to home fighter Peterson by two scores of 113-112 against him at the George E Washington Convention Center, was deducted a point by Cooper in both the seventh and 12th rounds for pushing.

Khan unsurprisingly disputed the calls - which were decisive in the outcome of the bout - and insisted any pushing was prompted by Peterson's own foul play.

"It was like I was against two people in there," he said. "He kept trying to pick me up. He was wild. He was coming in with his head lower and lower every time. I had to push him away because he was trying to come in with his head. He was just so low. He was being effective in pressurising me but I was the cleaner fighter all night.

"I am ready for a rematch. I am here and I will take it. I knew it would be tough against him in his home town and this is why boxing has not been in Washington DC for 20 years - because you get a decision like that. I thought he was going to head-butt me and that is why I pushed him."

Khan's team later announced they will formally question the performance of Cooper as well as "certain ambiguities" in the judges' scoring.

A statement jointly issued by Team Khan and Golden Boy Promotions said they would taking their grievances to the formal channels.

It read: "Following the decision in the fight, Team Khan and Golden Boy Promotions intends to make inquiries with the District of Columbia Boxing and Wrestling Commission, the IBF and the WBA regarding the performance of referee Joseph Cooper and will also be seeking clarification regarding certain ambiguities with respect to the scores of the fight."

The new WBA and IBF light-welterweight champion added: "I came into this fight as the underdog with most people giving me no chance of winning, but I followed my game plan.

"I knew this was a 12-round fight - not just three rounds - and I didn't get worried when I got knocked down in the first round. I came back. He was holding my head and pushing me down. That's why the ref took the two points off.

"My body shots were working."