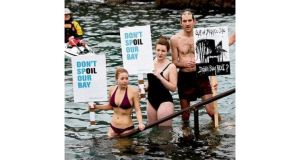 The company behind plans to explore for oil in Dublin Bay has surrendered its foreshore licence to the Department of the Environment.

Providence Resources Plc had planned to drill off the coast of Dalkey, in the Kish Basin.

In a statement this afternoon, the company said it made the decision to surrender the licence when it became clear that elements of an EU directive on environmental impact assessment (EIA) “were not transposed correctly in 1999 by the Irish Government”.

“The lack of clarity on this issue meant that the foreshore licence, and subsequent exploration activities, could have been subjected to ongoing legal challenges and undue delays,” the company said.

“The decision to surrender the foreshore licence now means that the Minister can move immediately to amend planning and environment regulations thereby ensuring that the Irish regulatory framework complies with the EU Directive.”

It said it will reapply for the licence once the issued had been resolved.

Responding to the surrender, Minister of State for Housing and Planning Jan O’Sullivan said she would review the EIA regulations in question with a view to removing any difficulties that may exist.