Woman held after man stabbed in face in Newry

Police says victim’s injuries not believed to be life-threatening 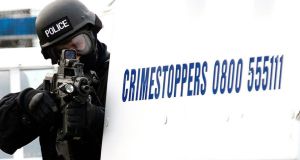 Police in Newry have arrested a woman on suspicion of grievous bodily harm and possession of an offensive weapon.

A woman (37) has been arrested after a man was stabbed in the face in Newry, Co Down.

The arrest followed an incident in the Talbot Street area at about 6pm yesterday.

The man was taken to hospital following the incident where he is being treated for stab wounds to his face. His injuries are not believed to be life threatening.

The woman was initially arrested on suspicion of grievous bodily harm and possession of an offensive weapon with intent to commit an indictable offence.

She was later rearrested on suspicion of attempted murder. She has since been released on bail while police continue with their investigation.