Will the ban on smoking in cars with children work? 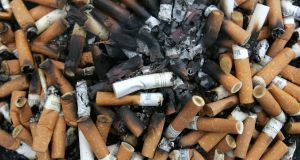 The Government has announced that drivers who smoke in cars in the company of children will face prosecutions and fines of €100 from New Year’s Day. File photograph: Alan Betson/The Irish Times

The Government has announced that drivers who smoke in cars in the company of children will face prosecutions and fines of €100 from New Year’s Day.

The 2004 ban on smoking in the workplace has been an overwhelming success, but there were significant doubts over its viability at the time.

The same could be said of this new legislation with many stakeholders wondering how it will be enforced.

A similar ban was introduced in England and Wales on October 1st and initial reports indicate police are treating it as a low priority.

Association of Garda Sergeants and Inspectors deputy general secretary John Jacob said gardaí would have to adopt a non confrontational approach as “it won’t work otherwise” and would “damage” the force’s relationship with the public.

“It’s a little unfair to be asking the gardaí to do it,” he said.

“People are not expecting gardaí to be stopping them from smoking in their own cars. I think it’s going to lead to a lot of disquiet among gardaí because they’re going to have to deal with it.”

In terms of whether the law will be proactively or passively enforced, Mr Jacob said it was likely gardaí would deal with situations as they presented themselves.

“I don’t imagine there will be checkpoints established to find these people,” he said.

“I’d say – like seatbelt enforcement – what will happen is that if a checkpoint is running and someone drives up smoking with a child in the car, it will be addressed on the spot. It will have to be a similar approach with this as it won’t work otherwise.

“It could damage the relationship with gardaí. If it falls to the gardaí to enforce the legislation, they will do it, but it will most likely be a passive enforcement.”

John Mallon, a spokesman for Forest Éireann, which is a group representing smokers, said there was no need for legislation as only a small minority of people engage in this behaviour.

“I don’t think there is a pressing need for this,” he said.

Mr Mallon said individuals instead ought to be educated on the dangers involved, and added the matter was “not just a health issue” but “a freedom of choice issue, a democratic issue, and – when you start interfering in the home – a parenting issue”.

In terms of enforcement, he said morale in the gardaí was already low, and the legislation was “another stupid law they will have to go out and enforce that will turn the public against them”.

Consultant oncologist John Crown, who first introduced the legislation with fellow senators Jillian van Turnhout and Mark Daly three years ago, said the law was about changing attitudes and that this was “working already”.

“People are realising that this is a dangerous thing to do,” he said. “There has been a powerful education effect. All the messages in relation to drink driving have made it very socially unacceptable and there has been a decline in the practice as a result.

“What was the main reason for drink driving legislation? Was it so that if somebody was involved in a serious accident while drunk that they could be appropriately punished or was it so that we could stop people drinking and driving in the first place?”

In terms of enforcement, he said: “I strongly suspect the gardaí won’t object to it.

“I think if they actually see somebody smoking in a car with a child present, they will do their duty, and it will be beneficial that they do.”