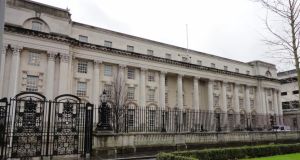 Royal Courts of Justice, Belfast. It has now been conceded that Norman Elder occupied the premises, which housed a tiger, wolves, snakes, lizards and dangerous dogs, on an oral monthly tenancy which was not lawfully terminated by the USPCA

A wildlife keeper has won a Northern Ireland High Court battle over being evicted from his Co Antrim sanctuary.

Norman Elder sued the Ulster Society for the Prevention of Cruelty to Animals (USPCA) after being forced to vacate the centre where a pet tiger was among the animals being looked after.

His action centred on a dispute over his right to remain on the site he rented at Benvarden, near Ballymoney.

It has now been conceded that he occupied the premises on an oral monthly tenancy which was not lawfully terminated by the USPCA. A further hearing to determine the level of damages in the case will take place later this year.

Mr Elder (51) was ordered to quit the site of his Wildlife NI animal hospital in February 2008.

He ran the facility which also housed wolves, snakes, lizards and dangerous dogs with the backing of the USPCA. But the charity intervened to have him evicted amid concerns about activities at the park after pictures appeared on a social networking site of a girl stroking a tiger in the sanctuary.

It has been accepted that his presence on the premises fell under the terms of the Business Tenancies (Northern Ireland) Order 1986, which provides greater protection from immediate eviction that a licence arrangement.

An order approved by the parties confirmed it was for a term in excess of nine months. It also stated that Mr Elder occupied the site in February 2008 on the basis of an oral monthly tenancy.

“The defendant did not lawfully terminate or forfeit the said tenancy,” the order continued.

With Mr Elder awarded costs of the action so far, Mr Justice Deeny listed the case for a further review in May. At that stage submissions will centre on the question of loss and damages sustained by the wildlife keeper.